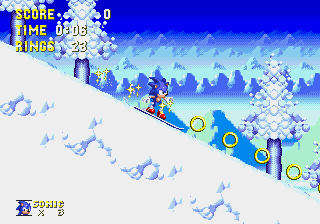 Near the end of Act 1, the game stealthily transitions the player into Act 2, which shows huge icebergs and a river full of ice floes in the background. After the Big Icedus is defeated, morning breaks as Act 2 officially begins. Act 2 is structured to be a speedy level in comparison to Act 1, with loop-de-loops, ramps and S-shaped tubes (like those found in Green Hill Zone and Hill Top Zone) placed around for speed. The freeze-guns and crushing pillars return, along with the addition of trampolines that catapult the player upwards; the higher they fall onto it, the higher they'll bounce. Lower routes take the player back into the caves, where they are filled with freezing pools of water that are essentially bottomless pits with sinking stepping stones (though Knuckles starts Act 2 within the caves). At the end of the Zone, all characters exit through a small, snow-filled tunnel leading to Launch Base Zone.

Due to obvious legal issues, the later Sonic & Knuckles Collection replaces all of the wildly different sounding, obviously licensed music (regardless of who was actually responsible), including IceCap, with original songs. It seems at least some of the legal issues were resolved for other rereleases of Sonic 3 such as Sonic Jam, Sonic Mega Collection, and so on.