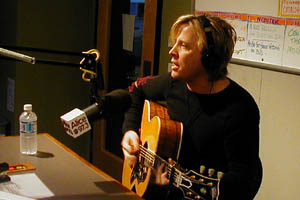 Gunnar Nelson, as seen at a San Francisco radio station.

Gunnar Eric Nelson (born September 20, 1967, in Santa Monica, California) is a musician. He is the son of actress Kristin Harmon and former teen idol Ricky Nelson.

Along with his twin brother Matthew, Gunnar has been a member of the hair metal band Nelson since 1990. Their single, "(I Can't Live) Without Your Love and Affection" was a #1 hit in September of 1990.

Gunnar has now entered Celebrity Fit Club 3 after the departure of Jeff Conaway. Even though to most observers Gunnar was already very slim, he seemed to have an alarmingly critical issue with self-image. This often led other contestants on the show to visibly grimace when Gunnar made comments about being overweight, when the other players were obviously actually overweight and not just wishing for a more sculpted figure.