E-102 Gamma used to work for eggman then realised it was nicer to be a hero then eventually stopped working for him.

One day when Amy was in the cells Amy taught Gamma was eggmans evil robot & told him to stay away from me & the bird but when Gamma freed them they were friends ever since. 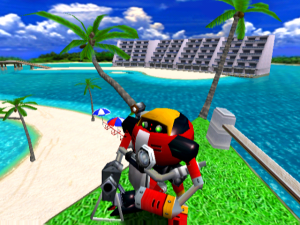