Chroma-Cammo is Espio the Chameleon's ability to turn invisible, first introduced in Sonic Heroes. Combining his ninja sneakiness with the innate chameleon capacity to alter his colour, Espio can render himself undetectable by both Eggman's robots and other characters.

The move is first namedMedia:SonicRivals2 PSP US manual.pdf[1] when it appears as Espio's signature move in Sonic Rivals 2. Pressing 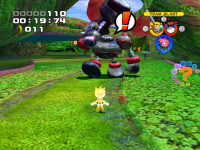 Amy hacked to have Chroma-Cammo.

In Sonic Heroes, Chroma-Cammo versions of other Speed formation characters besides Espio are passed through the secondary effect renderer, but these weren't used as the game was programmed only for Espio to use this effect using Leaf Swirl. Other side effects such as with Amy being invisible causes her hammer to be hidden and they can still be detected by enemies or frogs. On the PC version, the Chroma-Cammo effect renders exclusively for Espio and others including Sonic, Shadow and Amy aren't rendered with this effect when being invisible.