Controls for the second player are broken in the 1207 build, however if a six button control pad is used, movement can be restored by using

(down) and MODE (right). The regular buttons aren't mapped to anything, so traversal can be tricky.

Whereas the game locks controls for player 1 at certain points (such as finishing a level), player 2's controls are never locked.

While a "Time Attack" option exists in the menu of the 1207 prototype, it will usually take the player to the same character select, NPC select and "atraction" select as seen in regular play. However, for reasons unknown, it will sometimes take the player to an actual (albeit broken) time attack mode. 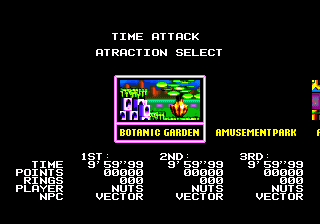 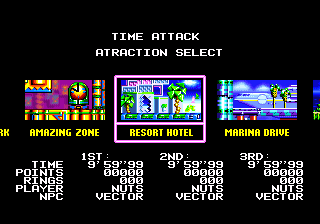 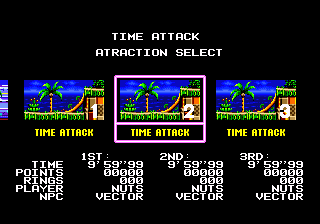 In this build, the menu simply acts as another stage select. However, the choices are limited; the first five options load level 0 of Botanic Base, Speed Slider, Amazing Arena, Techno Tower and Marina Madness respectively, which are in various states of completion (see "Hidden levels" below for details).

The last three stages, simply labeled as "Time Attack" are unique for using an Isolated Island icon, not seen elsewhere in the prototype (or the final game). The first two load Isolated Island stages with no objects, while the latter loads an empty level. These would become the "Training" levels in the final game.

The player also cannot pick characters in this mode - he/she will always play as Mighty with Knuckles as a partner. It not possible to set times, and the in-game rules are no different to standard play (e.g. the Bonus Stage or Special Stage turned off which would presumably hinder a real time trial mode). Finishing takes Mighty and Knuckles to the World Entrance, as is the case elsewhere in the prototype.

In the menu, there are placeholders for scores and times set by "NUTS" with Vector as a partner. It is unconfirmed who "Nuts" is, however judging from earlier "Knuckles' Ringstar" prototypes featured in magazines, it has been suggested this could be Mighty. Mighty is referred to "Nat the Armadillo" in earlier builds, and the Nat/Nut difference is thought to be down to a mistranslation (similar to Sonic Crackers' use of "Studium" (Stadium) in its ROM header).

Remnants of this screen were removed by the 1227 prototype, and while it too has a "Time Attack" option, it just leads to an empty level. 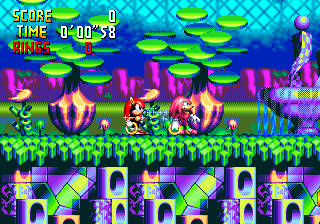 While there are similarities to level 1, Botanic Base 0 has a smaller map than levels 1-through-5. It cannot be completed. 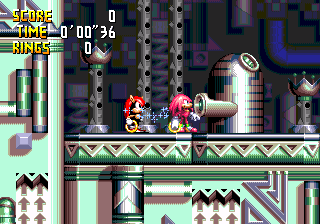 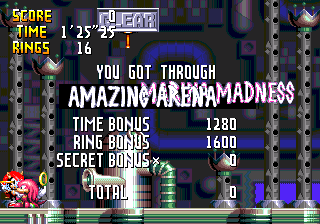 Also sharing some similarities to level 1, Amazing Arena 0 is a shorter stage with no clock areas. It can be beaten legitimately using level 1's object placement.