Difference between revisions of "Wisps" 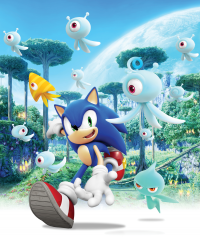 Sonic with Wisps in promotional artwork for Sonic Colours.

Wisps are extraterrestrial creatures introduced in Sonic Colours. Dr. Eggman captures the Wisps to power his interstellar theme park, and Sonic is tasked with rescuing the diminutive aliens from the mad scientist's clutches. According to information so far, there are at least seven or eight Wisps available in the game. As the player progresses, more Wisps are unlocked, which will then appear in both later and earlier stages. The Wisps may resemble jellyfishes.

The small, color-coded, floating alien creatures each contain a different ability that Sonic can harness by collecting them. When a Wisp is collected, the gauge on the bottom-left corner of the screen will display which Wisp is currently active. Upon activating a Wisp's color power, the gauge will begin to deplete until the current power is entirely used up.