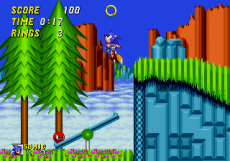 And even higher above:

In Sonic Mania, there are two Zones present that were already present in Sonic 2, Chemical Plant Zone and Oil Ocean Zone, but this game presents two more Zones that are evidenced to be on West Side Island by transitions linked to the aforementioned zones. They are: