Like the Chao Adventure minigame on consoles, Tiny Chao Garden allows you to take your Chao with you and raise it on your Game Boy. Your Chao does not age like it does in Sonic Adventure, so you have plenty of time to raise all of its stats to level 99. You must pause the game and select Save & Exit for progress in the Tiny Chao Garden to be recorded. Simply turning the system off will not save your progress. 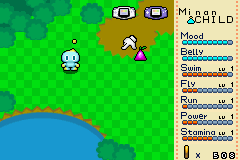 You begin the game with a free normal Chao egg. To hatch it, simply leave it alone, or pet it by moving the cursor over it and pressing the

button (hereafter "clicking") to speed up the process. Neither method affects the Chao after it hatches. The hatched Chao comes with a default name; its name can be changed at any time without consequence by clicking on its name in the right panel. Below its name is its life stage. Chao do not age in the Tiny Chao Garden, so a newly hatched Chao will be in the Child stage if you never transfer it to another game. The other stages are Normal, Swim, Fly, Run, Power, or Chaos, as in Sonic Adventure 2: Battle and Sonic Adventure: DX.

The goal is to keep your Chao happy and healthy. Its happiness is gauged by the Mood bar in the right of the screen. Petting the Chao at the right times will raise its Mood stat by 1 bar. Occasionally, weeds grow in the garden. They affect your Chao's mood, so it's best to pluck them by clicking on them. Sometimes, your Chao will speak to you. What it says is usually influenced by its mood, but other than that is random.

Its health is gauged by the Belly bar. You must feed the Chao fruit purchased from the store to keep it full. It will not eat anymore when full. Some foods will increase or decrease a Chao's mood. Both the Chao's health and happiness slowly decrease over time. If a Chao's mood and belly bars are empty for long enough, it will run away and you will lose it forever.

Below the Chao's Belly stat are other stats which are useful only if you plan on transferring them to another game. They are Swim, Fly, Run, Power, and Stamina. The stats are effected by the fruits the Chao eats. Stats can be raised or lowered this way, but once they hit a new level, they cannot go down to the previous level.

There are two minigames you can play to earn rings to spend on things in the store. To access them, click the first (white) GBA or the second (purple) GBA in the upper right corner. The white GBA minigame depends on your version; see the minigame section for details.

Finally on the bottom of the right panel is the number of rings you currently possess, which are earned from the main game or the minigames.

button, the store menu panel appears on the left of the screen where you can buy fruit, Chao eggs and toys using rings earned either in the main game, or in the various minigames. The fruit and eggs can be uploaded to Sonic Adventure 2: Battle and Sonic Adventure DX. The Tiny Chao Garden has special colored eggs, and is the only place to buy Normal Chao eggs, which are free. Press the

button again to close the panel.

The different fruits one can buy at the store all have different effects on the Chao. They are summarized as follows:

You are allowed to raise only one Chao at a time, however you can purchase a single Chao egg to keep in the garden to transfer to another game later. Between the last fruit and the toy slot in the store, a random egg is shown for sale whenever you boot up the game. The more expensive the egg, the rarer it is to appear in the store for purchase.

The last slot in the store is a toy you can purchase for your Chao. Only one is shown; you must purchase them in order. Once you buy them, they remain in your garden forever.

There are many games with a Tiny Chao Garden. Most vary in some way:

Included in Sonic Advance, and downloadable via Sonic Adventure 2: Battle and Phantasy Star Online, the first version of Chao Garden includes basic Chao care. The PSO version has a title screen, much lighter backgrounds, and also comes with a Tails Chao.

All Version 1 Tiny Chao Gardens have Janken as the first minigame.

Included in Sonic Advance 2, Sonic Pinball Party and downloadable via Sonic Adventure DX, your Chao can now Swim and Fly if it has high enough stats to, and will emit Z's when sleeping. Also the Chaos are not hatched, instead they are dropped.

Each Tiny Chao Garden has two minigames. The first minigame, accessed by clicking the white GBA, varies between games:

The second minigame, the purple GBA, is the same for every game: Chao Memory. 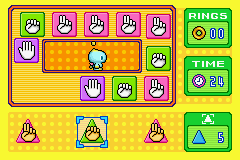 Included with Sonic Advance, Sonic Adventure 2: Battle and Phantasy Star Online. Several cards with a random distribution of Rock, Paper, or Scissors hand gestures on them fly around your Chao. At the bottom of the screen, you are dealt three random cards like those above. You earn rings by shooting the cards at the bottom into the cards spinning around. You are given a time limit of 30 seconds to remove as many cards as possible.

You are given a stock of 5 replacement cards in addition to the 3 given at the start. The rules of Rock/Paper/Scissors apply:

As you remove cards, the remaining ones will go faster. When you remove all but the last card, the last card moves around much faster. If you remove the last one, a new set of cards appear and you are given an additional 10 seconds to continue, however your stock is not replenished. The cards you receive at the start of the game and from the stock are entirely random, so it is entirely possible that you will have three Rocks when there are only Paper cards left on the field.

When you run out of time or cards to shoot, the game is over and you return to the Tiny Chao Garden with any rings you earned.

Included with Sonic Advance 2. Cream and Cheese the Chao team up to get rings, Cream moves a spring on wheels in order to spring Cheese up to get the rings with fly across the sky. You clear the level by getting all the rings. Later levels have more rings which are higher up and require timing to launch Cheese higher, as the spring is also on a see-saw. If Cheese hits the ground, you lose a life. You lose the game if you let Cheese fall 3 times. The game ends after you win the 3rd round. If you do win you get 113 rings. 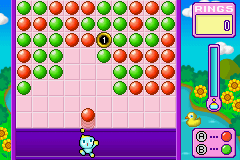 Included with Sonic Pinball Party. Several red and green balls appear at the top of the screen and descend lower, with your Chao is at the bottom. Your goal is to remove as many balls as possible, releasing any rings above them. By pressing

, you can throw more red and green balls upward, respectively. When 10 balls of the same color are touching, they disappear. When rings fall, you must maneuver your Chao so it catches them, or they will fall off the bottom of the screen and be lost. As the game goes on, the speed of descension increases, but the caches of rings become larger.

If you shoot a ball so that it encases balls of another color with a ball of the same color on the other side, any balls in-between will become that color, speeding up the removal process. E.g. If you have RGGGG and shoot a red onto the right end, RGGGGR turns into RRRRRR. Indeed, in the picture to the right, when the red ball connects, the green ball under the ring will be transformed into a red ball, and the balls will be removed and the ring will fall. This works orthogonally and diagonally, and chain reactions will occur.

Note that these removals do not occur automatically when balls spawn from the top of the screen, it is something you must trigger. There can be dozens of balls of the same color touching, and encasing balls of different color, but they will not disappear or change color until you fire a ball to trigger one or both of the removal techniques. If even a single ball descends into the purple Chao area, the game is over and you return to the Tiny Chao Garden with any rings you caught. 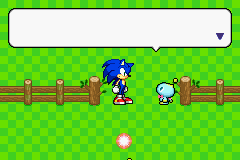 Included with the Tiny Chao Garden downloadable from Sonic Adventure DX, Chao Search has Cheese asking Sonic to help him find and gather 10 Chao friends to him at the top of the play area. Sonic is only given the Chao's name, which is not helpful as you are not told the Chao's names as you encounter them. You are given two minutes and must walk around the randomly generated area finding glowing orbs; touching them will have Tikal give Sonic a clue as to the whereabouts of the Chao, such as what the Chao is currently doing (eating, sleeping, &c.), if he's on the grass or pavement, or if the Chao can see Sonic and if so, from which cardinal direction. You must use deduction to find the correct Chao within the time limit, and bring it to Cheese. Each Chao you successfully return will get you rings, with more rewarded the more you find. Each incorrect guess will deduct 30 seconds from the timer, which is a huge portion of your allotted time, so it is wise to seek out as many clues as possible. 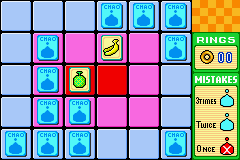 The second minigame in all versions of the Tiny Chao Garden. 14 cards with 7 different food items (Apple, Banana, Cake, Candy, Lime, Lollipop, and Orange) on them are set up on a 6 by 5 grid. After being shown all the cards for a moment, the cards will all be flipped over. Then, your Chao will walk around a random path; he will push any cards along his path if there is a blank space behind them. Pressing

When you use up all three mistakes, the game is over and you return to the Tiny Chao Garden with any rings you earned.