Template:SuperCharacterSheet Super Sonic, first seen in Sonic 2, is achieved when Sonic collects all seven of the Chaos Emeralds. He has appeared in almost every single main title since.

In Sonic 2, Sonic 3, Sonic & Knuckles, Sonic 4, and the Wii version of Sonic Colours, Sonic is capable of achieving this state after collecting all of the Chaos Emeralds, acquiring at least fifty rings, and pressing jump twice. However, it should be said that there are a few exceptions to this activation method, particularly in the cases of Sonic 4 and Sonic Colours, in which commands separate from jump initiate the ability. In this state, Sonic dons a glowing gold color, is virtually invincible, is faster, and can jump much higher. The defining catch for most appearances of Super Sonic is that 1 ring is depleted per second. Sonic can maintain this state with a constant supply of incoming rings, but once he runs out, he will revert back to his normal self. Super Sonic is vulnerable to instant death via the same methods as his normal form, such as by falling down a bottomless pit, being crushed, or (with the exception of Sonic 4) drowning.

Beginning with Sonic & Knuckles, it has become a recurring theme for Super Sonic to appear for the final boss. For such encounters, Sonic already begins with fifty rings, and even though Super Sonic is invincible to all attacks, there have been some recent cases (such as in Sonic Advance 2, Sonic Rush and Sonic Unleashed) where bosses have been able to reduce Sonic's ring count during this time. Sonic Adventure was the first game to feature Super Sonic playable only in the final boss (although game data shows it was intended for Sonic to transform in levels the same way as in Sonic and Knuckles), and up until recently, Sonic has been incapable of transforming outside of these specific instances. Sonic the Hedgehog 4: Episode 1 and Sonic Colours are notable for being the first major titles to both include Super Sonic in normal play since Sonic & Knuckles and for being the first main installments since Sonic the Hedgehog 2 to include the feature yet lack an extra scenario dedicated to it. Games to not feature Super Sonic at all include Sonic 3D Blast, Sonic Battle, Shadow the Hedgehog, both Sonic Rivals games and all Game Gear and Master System releases.

Hacking Sonic 06 has revealed an incomplete, unused "Rainbow" Gem, that makes Sonic strike a pose after which he was undoubtedly intended to go super.

In the Wii version of Sonic Colours, Super Sonic has unlimited Sonic Boost, cannot use most Wisp powers, and forgoes the double jump in favor of a maximum leap that reaches the same height. Super Sonic seems to be handled more as a mode, as the use of Super Sonic is triggered by enabling him in the "Options Satellite". As such, levels played when using "Super Sonic mode" are slightly tweaked to allow level completion without Wisp use. With Super Sonic on, even normal Sonic is unable to use any Wisp powers aside boosting. In the bottom-left corner, when 50 rings are obtained, the area where a Wisp would be shows the seven Chaos Emeralds, shining when Super Sonic is activated. Super Sonic also has the ability to crush blocks that would normally only be breakable when in a Wisp form. Additionally, Super Sonic replaces Sonic in the overworld when selecting an act to play.

Super Sonic has also been playable in a handful of spin-off titles. He is an unlockable character that is earned in Sonic Shuffle upon purchasing the bottom right picture in Sonic's album. His special movement ability is "Light Speed Spin Dash", which allows double the movement when the same number is played twice in a row (this can be chained until the player runs out of duplicate cards). His battle ability is "Sonic Rumble" where the roulette only contains the values four to six. 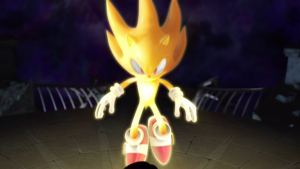 In Sonic R, Super Sonic is the last unlockable character. He is not unlocked by getting tokens, as the others are, but is unlocked by collecting every Chaos Emerald, while making sure to maintain 1st place in the process. If a character get an Emerald but fails to come in 1st place during the same race, the game will not consider the emerald earned. Super Sonic is the fastest character in the game by a wide margin, and can double jump and even run over water. Super Sonic is universally considered to be the most effective racer, and essentially shatters the balance of the game.

In the Sonic Riders series, the Chaos Emerald gear is unlocked when the player completes all missions with the highest rank. This gear, which is exclusive to Sonic, starts the player off with thirty rings which deplete by the second. Although he has infinite air and has all three attributes (Speed, Flight, Power), Super Sonic uses up rings at a much faster rate when drifting, boosting, or attacking opponents. When he runs out of rings, Sonic takes to running on foot until he can collect a single ring. In the sequel, Sonic Riders: Zero Gravity, Sonic starts off with no rings, yet when he does collect them, they deplete at a very slow rate, giving him time to build his supply. As above, Super Sonic's ring total depletes at a multiplied rate when he uses gravity control, making it very impractical to use it at all. Once he collects 60 rings, Super Sonic goes into a permanent boost mode (acquiring the Power attribute, the only one Super Sonic possesses in the game) and his supply runs short quickly.

Super Sonic also appears in several non Sonic games that Sonic cameos in, including both Sega Superstars titles, Super Smash Brothers Brawl as his Final Smash, and as his All Star Move in Sonic & Sega All-Stars Racing. 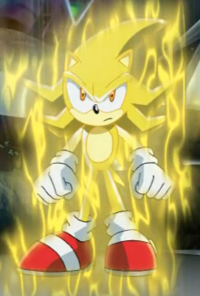 In the UK comic series by Fleetway, Sonic the Comic, Super Sonic is evil. Under extreme stress or exposure to Chaos Energy, Sonic transforms into a demon-like version of Super Sonic. His abilities from the original games are the same (faster, invincible, etc.), except he can fly and can fire laser blasts from his eyes. He is completely uncontrollable and destroys anything and everything, whether it be because it is in his way or for the fun of it. When Sonic reverts back to himself, he has no recollection of any events that have occurred.

The "Running Wild" multi-part story was a major turning point; as Sonic was accidentally exposed to the Chaos Emeralds and Master Emerald at full power at the same time, he emerged more psychotic than ever before and tried to kill Amy Rose, Tails, and Johnny Lightfoot. They were able to trick Super Sonic and, with the help of a Star Post, managed to separate Sonic from Super Sonic, with Super Sonic warped to the Special Zone. In the last few issues of the comic (the "Chaos Saga," an adaption of the game Sonic Adventure), Super Sonic was merged back into Sonic by a comic-exclusive character called Ebony.

Super Sonic is a fan favorite amongst the Sonic the Comic community, as he represents a more dark, edged version compared to Sonic Team's version of him. In a demonstration of the "eye of the beholder" principle, his fans and his detractors often cite the same exact reasons for their opposite opinions.

A single issue of the American Sonic the Hedgehog comic series, published by Archie Comics actually features an evil Super Sonic. When Sonic is accidentally transported into space, he comes across a colony on the planet Thoraxia that possesses a set of red Chaos Emeralds (which strikes Sonic as unusual, as the Chaos Emeralds on his planet were all green). While the colony is under attack by rival aliens, Sonic uses the red Chaos Emeralds in a desperate attempt to save them.

However, this causes Super Sonic to manifest as a separate entity, who wastes no time in laying havoc on the colony himself (including the rival aliens). Sonic manages to hold him off, but is brutally beaten in the process. However, Super Sonic eventually fades away, as much like the real Super Sonic, his power is only temporary. Otherwise, Sonic is able to transform into Super Sonic by absorbing either Chaos Emerald energy, or energy from the Master Emerald.

In the animated series Sonic X, as well as the spin off comic series of the same name, Sonic is able to become Super Sonic by simply collecting the Chaos Emeralds like in the games, and also comes in an enraged form, Dark Super Sonic. It is worth noting that Sonic and Shadow are the only characters to use super transformation in the series. Super Sonic does not appear in any other animated media.

Upon closer inspection of the Sonic 2 Super sprite, it seems that Super Sonic is actually buff, with buffer arms, and a pushed-out chest. This isn't visible from a distance, and is probably why they reverted him to his normal look in later games.