Stardust Speedway is a very psychedelic stage consisting of many, many twisting highways decorated with musical instruments and flashing spotlights in the night sky, making for Sonic CD's largest Round. Many of these highways are littered with Springs and Speed Boosters that instantly propel Sonic to top speed, sending him both on his way and in the opposite direction. Thare are also floating launchers that require the player to time their entrance to be fired a certain direction, but some launchers will have them time a button press to get fired out in the direction they want.

The Round's most prominent gimmick is a path-swapping system, as many of the roads converge with each other at many places. By Spin Jumping at the many yellow panels with blue spheres on them found throughout the Round, the player will switch between different paths, allowing them to switch to roads in the background and back to the foreground. Combined with the dizzying speeds, the player can easily become disorientated. However, there are plenty of places where the player will bounce back and forth, which are very useful for activating a time warp. The only hazards the player needs to watch out for besides the Badniks are spiked balls and swinging spiked platforms.

Near the end of Zone 2, the player will arrive at a giant building that varies in appearance based on what time zone they're in. In the Present, the building appears to be a giant golden Eggman statue that's under construction, but only in the Bad Future will its construction be complete. In the Past, the building is a Gothic-styled cathedral, while in the Good Future it takes the appearance of a beautiful cathedral.

Upon arriving at Zone 3, Sonic will be thrusted into a fated race with Metal Sonic, with Amy Rose as the prize...

None of Stardust Speedway's Badniks have official names besides those which appear in the game's source code, but they are: 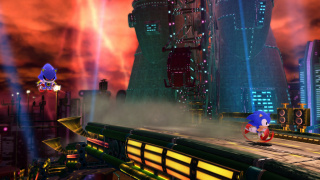 Stardust Speedway's Bad Future returns in Sonic Generations as a Rival Battle level. It isn't named in this game, as it is simply the setting for a boss battle with Metal Sonic. Its soundtrack is a remix of the EU/PAL version's soundtrack in all versions, but a remix of the US version is unlockable.

Stardust Speedway is briefly shown during the opening sequence of Sonic the Hedgehog 4: Episode Metal, complete with Sonic CD's original title card, where Metal Sonic is left in a broken, inactive state for a long time. Dr. Eggman would send a drone to the Little Planet to revive Metal Sonic, and order him to fly back to Mad Gear Zone on Sonic's world for repairs.

The stage reappears in Sonic Mania in its Past and Present versions respectively Act 1 and Act 2, with a new and varied range of gimmicks including those imported from Marble Garden Zone. The player appears in the past of the Zone because of the powers of the Phantom Ruby in the hands of Dr. Eggman.