This page has a list of articles for Sonic Spinball and covers short magazine articles not deserving of their own page.

This clip covers 3 Sonic games, one of which is Sonic Spinball.

This clip from the foreign language Megaforce magazine has a preview of Sonic Spinball. The article has prototype screenshots of the game.

A short article talking about Sonic Spinball being the next game in the Sonic series. 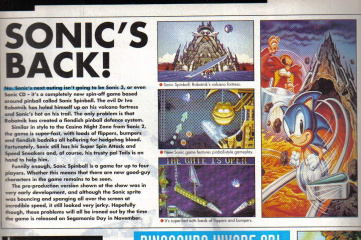