The game was first announced on the GameSpot website on 9 September 2009, and will be a 2D, download-only title on Xbox Live Arcade, PlayStation Network, WiiWare, and Apple's iPhone and iPod Touch; and will feature HD graphics on the former two platforms. It is a direct sequel to Sonic & Knuckles and is set after the events of that game. It will be released in episodic format, with its storyline spread across the episodes. Takashi Iizuka, who was involved in level design in Sonic 3 & Knuckles is overseeing the project, while Jun Senoue is the game's Sound Director.

On March 22, NGamer revealed that the game will have 3 Episodes, each comprising 4 Zones. [1] Each Zone has 4 Acts, the last of which is a boss battle with Sonic's perpetual nemesis Dr. Eggman.

The game intends to replicate the feel of 16-bit era Sonic games with elements such as momentum-based physics and classic-style badniks. Each zone will feature 3 acts, similar to Sonic 1's gameplay, along with a boss act. Further details are yet to be revealed.

The silhouetted emblem resembles that of the one from Sonic the Hedgehog
On September 8, 2009, Sega revealed to GameSpot details about a new 2D Sonic game. Named Project Needlemouse after Mr. Needlemouse, an early prototype of Sonic, it would be released in 2010 and feature HD graphics. GameSpot conducted an interview with Sega's associate brand manager, Ken Balough. Balough described the game as a response to "old-school Sonic fans [who] have long asked to see Sonic return to a more 2D style of gameplay."

A teaser video (info) (2.41 MB) was also released. While the video didn't include any actual gameplay, it showed Sonic racing around collecting rings, with the words "Speed returns in an all new 2D adventure built from the ground up." It included sound effects from early Sonic games (like the original Sonic the Hedgehog). The video concludes with a silhouetted "ribbon, ring, and stars"-style emblem, which hides details such as the game's true name and main character (which would later be revealed as Sonic). The shape of the emblem closely resembled that of the one on the original Sonic the Hedgehog's title screen.

On Monday, January 11, 2010, the "Project Needlemouse Character Countdown" began on the official Sega Blogs. This countdown would eventually reveal that Sonic is the only playable character in the game, after goals were met by the community. On Monday, a picture was released showing the names of potential playable characters. Each day that week until Friday, names would be crossed off that picture if enough fans answered Sonic-related trivia questions correctly. The list of possible characters included: Chip, Charmy, Shadow, Sonic, Vector, Sonic's new friend Mr. Needlemouse, Shade, Tikal, Big the Cat, Amy and Froggy. 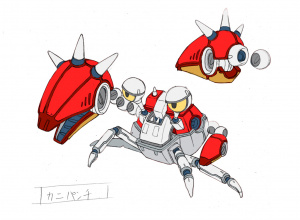 All of the trivia questions had to do with the gameplay or creation of early Sonic games. This strengthened the idea that Project Needlemouse would be a game that somehow was related to the first Sonic games. In revealing that Sonic is the only character, the Sega Blog acknowledged that this was in response to "thousands of [fans] out there asking for a game where Sonic is the only playable character." Project Needlemouse would focus only on Sonic. The Shellcracker concept artwork further suggests that this game is closely related to the original Sonic games like Sonic the Hedgehog and Sonic the Hedgehog 2. 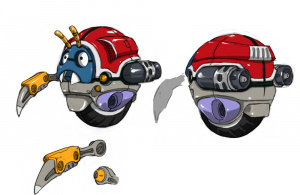 On January 27, 2010, the official Sega Blog announced the second and final competition. This competition was realized because of Trakker's magnificent artwork of Slicer, which was in the same style as the official Shellcracker artwork released. Because of how impressed Sega was with it, they started the 2nd competition, which took a different path than the first one. It asked blog visitors to submit their own concept art of badniks. Along with the competition, concept art of a Motobug was shown.

The challenge was completed, and Sega announced the next week would be Hedgehog Week, which would start on GroundHog Day, "Hedgehog Day," and would be a week full of big reveals and possibilities to earn prizes.

Hedgehog Week started on Hedgehog Day. (Groundhog Day in US) The reason this day was chosen was because it was the original release date for Sonic 3. The 1st things revealed on Hedgehog Day were as promised, 2 new pieces of concept art: a palm tree and a sunflower, both reminiscent of Sonic 1. The bonus turned out to be a short clip of music from the new game, which accompanied the "Happy Hedgehog Day" banner on Sega's official website.

This particular blog post was also where the prizes would be decided by post numbers. The big prize was a copy of Sonic 3 that was signed by one of its original developers, Takashi Iizuka, with post #333. Other prizes included "a Sonic & Metal Sonic Wall Scroll (Featuring classic Sonic – who has black eyes), a brand new Sonic the Hedgehog Clock, a Sonic Towel and more!" Most winners were in 50 post increments. (50,100,150,etc)

Sega said not to confuse the music as the big surprise, and stated that the surprise would be revealed on Thursday, February 4th, 2010.

On February 4, 2010 at midnight PST, the official title of Project Needlemouse, Sonic the Hedgehog 4, was revealed on the Gamespot website. It was accompanied by an interview with Sega's Ken Balough and a trailer containing a few seconds of gameplay footage.

The level select in this leaked image displays the 4 zones featured in Episode 1. Splash Hill Zone is currently highlighted.

In February, a build of Episode 1 was submitted to Xbox Live Arcade's PartnerNET service, where developers are given access to upcoming downloadable titles for testing purposes. Soon after, screenshots, music and progressively more gameplay footage were leaked to the Internet. Eventually a playthrough of the entire game had been leaked, and Sonic Retro, who had already banned leaked material when more than they approved of had been released, responded by banning Sonic 4 discussion for several days. As well as this, PartnerNET shut down for a night. Other websites also made efforts to crack down on leaks, such as banning posting of leaked content. The build was controversial, due to it containing "floaty" physics speculated to be due to its using the Sonic Rush engine, poor animations, and criticized level design such as gimmick-based Acts that were disliked by most fans.

On May 20, 2010, SEGA announced that, due to fan input, the game would be delayed until later in 2010, in order to extend the development of the game. They have stated in game magazines and on GameSpot's On The Spot that this was specifically done to allow various fan requests (since the game was leaked) to be implemented, including more momentum-based level designs and improved physics closer to the Mega Drive titles.

Releases for the iPhone and iPod Touch were also announced, finally ending speculation of the 4th unknown platform, although it was leaked months before when images were found in the website's source code. It was also revealed that the iPhone platform will receive two extra levels, which will most likely be the Mine Cart and Pinball gimmicks in Lost Labyrinth Zone Act 2 and Casino Street Zone Act 2, which were heavily criticized in the leaked gameplay footage. This is thought to have been done because such levels fit the iPhone controls more. Fans have speculated (and many hope) that the console versions will receive new non-gimmick levels to replace them.

A video on YouTube from E3 dated June 11 has led some fans to believe that physics changes have already been made to the game, although Sega staff have stated that the build at E3 was not the most recent one.

In June, SEGA announced a contest to celebrate Sonic's 19th anniversary where people would create videos with the winner going to Tokyo to see the finished version of Episode 1. Running only in the United States and United Kingdom, 10 videos from each country were put up for voting, two UK entries included Sonic Stadium staff members Dreadknux and T-Bird. The voting system was intended to allow one vote per day, however people found workarounds to allow multiple voting by clearing their browser's cookies and cache due to poor site coding. On July 16th, SEGA suspended the voting.

Sonic the Hedgehog 4 has been criticised due to the design and content of the game. Some people believe that it is not a true sequel to the classic games, due to Episode I's content being largely based on that of previous games with minor changes, and level design that features speed boosters in every level (a staple of Dimps' level design with their previous Sonic games) and object placement that forces the use of the Homing Attack. The latter is a move that some fans do not feel belongs in a 2D game, particularly not one based on the classics and set before its debut in Sonic Adventure. The music has also been criticised, due to it featuring low-quality synths and drum samples (the latter from Sonic 2, not the more advanced ones from Sonic 3) that vary little between songs.

A highly controversal item is Sonic's design, which is the modern style model that debuted in Sonic Adventure and has since received refinements until its most recent state in Sonic Unleashed. Many fans believe that the classic Sonic design should have been used, and a petition was set up for SEGA to include the different version. However, in a magazine Takashi Iizuka said that the classic style wasn't returning, as all games since Sonic Adventure have featured Sonic in his modern design.