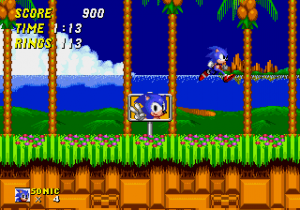 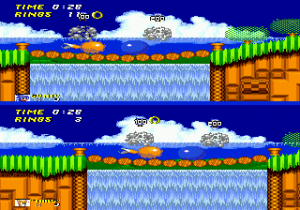 On Hill Top Zone, it is possible to crash the game when hitting Rexon (the snake-like badnik that sits in the lava). Conflicts in the code cause it to jump to a section of code it was never meant to jump to. This results in invalid opcodes being processed and an eventual crash.

In Oil Ocean Zone act 2, find the area with four green platforms which launch into the air occasionally. Step on the last one and when being shot out of the the tube hold right and land on the spikes in a way that will knock you into the round object to the left. If done correctly the physics will be different and the character will jump higher. The bug eventually wears off when getting in another speed tube, jumping on a spring, or passing through a wall. Alternately you can use this Pro Action Replay code while on that level FFB82C:04. This code only works when reaching that area.