This game was the first game to really propel the Genesis into mass popularity in North America. After it was released, it eventually supplanted Altered Beast as the bundled game with the console.

Sonic the Hedgehog added the element of speed to the standard platform formula, and introduced other unique elements as well, such as the loops and springboards now permanently associated with the game series.

In the game, Sonic has to prevent Dr. Robotnik (Doctor Eggman in Japan and in later games) from collecting the Chaos Emeralds in an attempt to rule the world - canonically this is Earth, but for a lengthy period of time was commonly believed to be Mobius, due to outside sources using the name.

There was also a version of Sonic the Hedgehog released for the Sega Master System and the Game Gear, which loosely followed the design of the Genesis version, although with some different zones and a level map.

The main villain, Doctor Eggman, has always been called that in the Japanese titles. However, in the European and American versions, his name is localized to Doctor Ivo Robotnik, and has stayed that way until Sonic Adventure, where he's been known as Eggman as well. Also, the name Robotnik was later used in the Japanese version of Sonic Adventure 2.

Although its Genesis counterpart was extremely popular in the United States, Sonic the Hedgehog only received lukewarm responses in Japan. Sonic wouldn't catch on in that locale until Sonic Jam. Because of its popularity, it later replaced Altered Beast as the pack-in for the Mega Drive.

The game that started it all, it featured many novel elements, utilising the parallel processing capabilities of the Genesis, which contributed to its popularity and helped to promote the uptake of 16-bit consoles.

The gameplay centers around elements that exploit the increased performance of the Genesis console. It is notable for being both simplistic and engaging for players.

The game was arguably the one of the fastest platformers that had yet been released. Sonic could run, jump and roll at significantly higher speeds than most platformers of the time. Unlike other platformers, the game's levels were designed to encourage the player to progress quickly. Springs, slopes, high falls and loop de loops were all available to both boost and challenge the player to reach high speeds. This was all accomplished without any slowdown in frame rates, adding to the experience.

Sonic's method of attack was also novel. As a hedgehog, he could curl up into a ball, by either jumping or by rolling along the ground, a state in which he could damage enemies by simply colliding with them. This was a change from most other platform games, where a the player could only damage enemies by shooting, attacking or jumping on top of them. While rolling along the ground Sonic could roll down slopes, gaining speed as he did so. Most slopes were irregular, as opposed to the fixed angles seen in older titles, and the game had physics to match. Sonic's acceleration down a slope depended on its steepness; he could run around 360-degree loops, if travelling fast enough; and he suffered from drag under water.

Sonic could collect rings to protect himself. As long as Sonic had at least one ring he would not die when injured. Instead he would lose all of his rings, which sprayed out and could be collected again. There were also shields available which allowed Sonic to be hit once without losing rings. However, neither shields nor rings could protect against instant death, brought on by crushing, drowning or falling off the map. 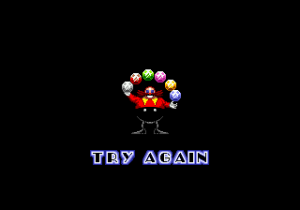 Robotnik mocking the player in the bad ending
Progress through the game was made easier by special checkpoints called lamp posts. When Sonic passed a lamp post, changing its colour, he could restart from that point - rather than the beginning of the level - when he next lost a life.

If Sonic has collected less than 6 chaos emeralds and is carrying 50 or more rings at the end of Act 1 or Act 2 of any zone except Scrap Brain Zone, he can enter the Special Stage by jumping in the giant ring which appears right next to the signpost to have the chance to collect one of the 6 chaos emeralds. It should be noted that despite their importance in the plot, collecting the emeralds is almost unnecessary in this game, as they're not required to unlock any final level and the game can be completed even without them. However, if less than 6 chaos emeralds are collected, Robotnik will juggle the remaining ones in the "Try Again" screen at the end of the staff roll.

The games featured no passwords or game saves. The player had to start from the beginning every time he ran out of continues or reset the console. There was, however, (albeit very cryptic to activate) a level select mode. ,

Hitting bumpers: 10 points for each of the first ten hits on any given bumper; after that no more points can be gained from that bumper

Hitting enemies: (a chain refers to all enemies destroyed until the next time Sonic lands on some form of ground)

Ring bonus at end of level: 100 points for each ring held

Time bonus at end of level:

End-of-level flags: On the screen where the goal post stands, there are sometimes flags you can trigger. These flags are hidden, but if you hit them they will appear and show either 100, 1000, or 10000. The flags that say "100" are really only worth 10 points each, but the 1000 and 10000 flags report their values accurately.

The game's 16-bit graphics were impressive for its time. Colours were lush and varied, taking advantage of the Genesis' enhanced colour palette, and the sprites were richly animated. Flowers moved, rings spun, lights blinked, and water shimmered in the background. Destroying an enemy robot produced a puff of smoke as a small animal flew or hopped away from its prison.

Leaving the game idle for more than a few seconds made Sonic tap his foot impatiently whilst looking at the screen, waiting for the player to continue.

The game took full advantage of the onboard Zilog Z80 and Yamaha YM2612 synthesizer sound chip. The game was filled with sound effects, with chimes, bops and beats following the player through the levels. Many sounds played on top of one another and most of the games sounds were unique and of higher quality than earlier 8-bit sounds.

The music of the game affords special attention, with many fans proclaiming it to be the most memorable feature. The music used 8-bit stereo sound, and was very rich and detailed. The music for Green Hill Zone in particular is a very well recognised tune, by many fans of the series and by other gamers. Many MIDIs and remixes of this track, and of other tracks in the game, can be found online.

The music was composed by Masato Nakamura, a member of popular J-Pop band DREAMS COME TRUE.

Each Zone featured three "acts" or levels each following the same theme as the last.

Differences between beta and final

For general information on unused Sonic 1 items, see the Game Secrets section for this game. For level-specific differences, check the individual level page.

Hivebrain has documented the changes between the first version and the newer Japanese version, which is provided below:

The Ribbon, Ring, and Stars

The distinctive "ribbon, ring, and star"-styled title screen used in the very first Sonic the Hedgehog game (and many installments in the series afterward) was something of a theme in early Sega games. The Sonic version is based on the title screen from the 1988 Sega arcade game Wonder-Boy III: Monster Lair, which bears similarities to that of the 1986 Sega arcade game Alex Kidd: The Lost Stars. Here is a list of the music featured in Sonic the Hedgehog, as it is located in the sound test, which can be accessed by entering the zone select code(Genesis version).

(For more standard tools such as ESEII and SonED, see Sonic Hacking Utilities.)

Disassemblies are like source codes. You can modify them how you want, reassemble them, and play it. Even though the ROM will be shifted, it will work because of labels.

See Sonic the Hedgehog OSV for a download page.