Back to: Sonic Jam. 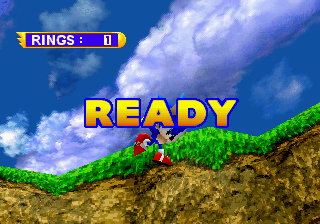 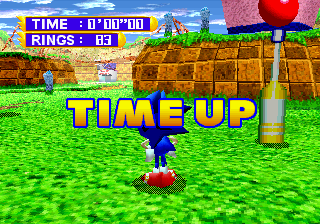 At the title screen menu, highlight Sonic World and press and hold

until Sonic World begins. This will start "Game Taikai Mode" (ゲーム大会モード)[1], a one minute "tournament" mode that was used when Sonic Jam was demonstrated at Tokyo Game Show 1997 Spring[1].

During this mode, the time attack wheel is removed and Sonic cannot access any buildings. There is a brief countdown when starting, a timer appears, and after a minute, the game resets, likely to discourage TGS visitors from spending too long at the exhibit. Contrary to what was reported at the time, there is no goal in this mode. Sonic can collect Rings, but obtaining all 100 (which is very challenging given the limited time available) does nothing, nor does touching all the lamp posts or finding Tails.

The mode loops endlessly until the player exits via the pause menu.

while choosing a movie in the movie theater to make it loop.

. This will cause all the movies will play one after the other. 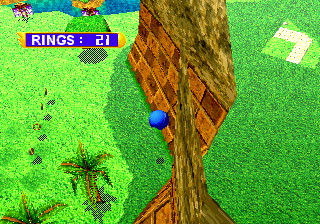 By fiddling with the camera in Sonic World, it is possible to find a unused piece of path behind the waterfall. It is reachable by using a glitch to go out of bounds, as explained here.

Through digging, a short, unused music track was found inside the game, as well as an unused sound effect.