Sonic Before the Sequel

Sonic Before the Sequel (abbreviated Sonic BTS) is a fan game created by LakeFeperd that serves as a interquel between Sonic the Hedgehog 1 and Sonic the Hedgehog 2. The player goes through numerous zones and alternates between Sonic, who wants to stop Dr. Eggman from launching the Death Egg, and Tails, who tries to keep up with Sonic and eventually teams up with him. During SAGE 2012, an update that included graphical improvements, an original soundtrack, and a bonus boss fight if you reach the good ending, was released.

This series of fan games made by LakeFeperd continued with a sequel, Sonic After the Sequel, and an interquel, Sonic Before the Sequel Aftermath (which formed into a different fan game, Sonic Chrono Adventure).

In the end of Sonic 1, Sonic releases the Chaos Emeralds and is teleported to Hilltop Heights Zone. There, he catches sight of the nearly completed Death Egg and speeds off to stop its impending launch. After duking it out with Eggman, he heads off into Star Shore Zone. There, Tails is looking awkwardly at a Motobug that seems to be asleep and tries to touch it. The Motobug awakes, and just as it is about to attack Tails, Sonic comes out of nowhere, destroys it, and hurries off. Tails, amazed at the sight, sets out to follow the blue blur.

Sometime later, a robot appears and begins to attack Tails, but he is able to defeat it. After a while, Sonic begins to feel that someone is following him. when he turns around, he sees Tails, who is very ecstatic to see him. Sonic tries to run away, but Tails just flies up to the platform Sonic is standing on. In an effort to escape, Sonic jumps into the water. Before Tails can follow him, he is captured by a flying capsule.

Sonic and Tails meet up once again, and Sonic allows Tails to tag along with him. Just as they are about to confront Eggman, Tails gets knocked off of the platform, with Sonic being unable to reach him in time. Tails falls into the clouds nearby and learns how to use his tails to increase his speed. He then fights the orb robot for the last time, scrapping it.

Sonic faces off against Eggman, who is fighting him in a body armor. Before the second phase, the seventh and final Chaos Emerald appears and Sonic is able to transform into Super Sonic. He defeats Dr. Eggman and powers down and starts falling from the sky. But before he reaches the ground, Tails appears and Sonic can land safely on the Tornado, Sonic's biplane. They arrive in Emerald Hill Zone and the events of Sonic 2 begin.

Sonic the Hedgehog: Sonic is a 15-year-old blue hedgehog who lives in no particular locale on the planet Earth, instead choosing to travel the world looking for fun and adventure wherever he goes. While he may be a drifter, that doesn't mean he only cares about himself. Sonic is known for his 'attitude', which is shown through his smugness and sarcasm. Sonic sometimes likes to show off in order to 'look cool'. He is often shown posing or adjusting his gloves or shoes. He is also often noted to be impatient and sometimes have a hot temper.

Miles "Tails" Prower: Tails is an 8-year-old orange fox whose most recognizable trait is his twin tails. While he was originally teased for them, he has learned to appreciate and love his tails, especially since they have come in handy once joining Sonic the Hedgehog in defeating Dr. Eggman's plans time and time again. Tails is sweet-natured and humble, not one to grab the spotlight for himself and instead, ready to help out his friend and idol Sonic whenever necessary. While he isn't the bravest, he has become more outgoing since he has met Sonic, becoming the hero when need be. Regardless, Tails hopes to one day be self-sufficient, and not constantly rely on others, and be just as independent as Sonic. 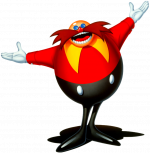 Dr. Eggman: The grandson of Professor Gerald Robotnik, Dr. Eggman was born as Ivo Robotnik. While much of his past remains a mystery, it is known that in his early years Eggman looked up to his grandfather, hoping to one day be as great a scientist as Gerald ever was. It was later on in life that Dr. Robotnik would meet his long-time rival and arch-nemesis Sonic the Hedgehog. While he could be anything, Dr. Eggman has set his sights on the highest prize of them all - global domination. Dreaming of the day he will be able to erect Eggmanland, Eggman tires endlessly at accomplishing this, though his plans are foiled time and again by the blue blur himself, Sonic the Hedgehog.

His boss machines in this game are based on the visual style of the Stunt Race FX characters.

Unnamed Orb Robot: The mysterious sphere-shaped robot that attacks Tails throughout the game. It resembles an Eggmobile with a black dome covering the top and triangular eyes. In Tails' boss acts, you fight him in place of Dr. Eggman. He is finally scrapped at Cloudy Crowd Zone, or is he...?

The game plays very similarly to the games of the Mega Drive days. Sonic and Tails have the Spin Dash. Sonic has the Super Peel Out, but not in the form of a figure eight. Tails can fly, much as he did in Sonic 3. There are 3 acts per zone, with the boss having its own separate act. Bonus stages can be accessed at the end of Act 3 for Sonic and Tails (these acts only get you extra lives, not the Chaos Emeralds). Unique to Sonic BtS is the addition of "Time Points", which determine your ending at the end of the game. If you fail to complete the game in under 2 hours, you receive the bad ending. If you do beat it in 2 hours or less, you fight a bonus boss and receive the good ending.

The SAGE 2012 version included an original soundtrack composed in collaboration between Falk, KgZ, Andy Tunstall and Funk Fiction. It was widely praised as being one of the best parts of the game to the point that even Jun Senoue admitted to like it. However, the music used in the cutscenes and special stages still remain intact.

The soundtrack can be downloaded at the SAGE 2012 splash page of Sonic BTS.