Pana Der Hejhog is a hack of Sonic the Hedgehog for the Sega Mega Drive by MarkeyJester. It features one new level, 'Mystic Island Zone' and a purple hedgehog that resembles Sonic, 'Pana'. It is notable for having extremely detailed graphics and fluid animation. 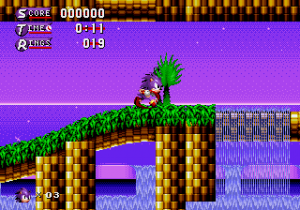 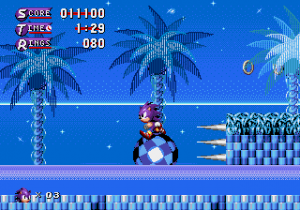 ...and it turned to ice. Demonstrated is the ball gimmick.

The game only has one level, Mystic Island Zone. It plays very much akin to Green Hill Zone for the first section, with a second section becoming icy, which will introduce a new weather system, complete with slippery floors. Pana will then encounter large balls that can be controlled by jumping onto them and then moving with the D-Pad.

will move the ball right and vice versa. Enemies are the same as those featured in Green Hill Zone, as well as Dr. Eggman being featured in the level to freeze and then fight Pana at the end of the level.

The boss fight is set on a spike pit, requiring the player to use the large ball to move and attack the boss. It is very similar to the Spring Yard Zone boss, except that Dr. Eggman drops the spike instead.

When it was originally released, people's expectations were that of a silly joke hack with no quality. Since then, it has been received very well and praised for its many graphical improvements over the original game and other small things like the Sega screen.