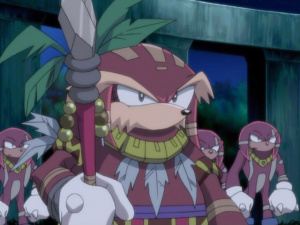 Pachacamac, as seen in Sonic X.

Pachacamac (or Chief Pachacamac, and sometimes known as Pochacamac) was the ancient leader of the Knuckles Clan echidnas, and was Tikal's father. He lived to 52 years old, stood three feet and nine inches tall, and weighed 106 pounds. In Sonic Adventure, his first appearance and only speaking role in the games, Pachacamac is shown with a furry muzzle (unlike other echidnas, possibly due to his advanced age) and he exhibits a constant squint; although this quirk was absent from his Sonic X portrayal.

Being long-dead, Pachacamac has only ever been seen in flashbacks: during Sonic Adventure thanks to Tikal (in her discorporated form as a glowing ball), and just before the last boss in Sonic Chronicles: The Dark Brotherhood, when Imperator Ix briefly recalls the face of his ancient foe.

Pachacamac inherited his chief rank from his mother and he is a greedy warmonger. Although at first he loved his daughter, he lost all compassion when his wife died. Tikal did try to talk her father out of his warmongering ways but ultimately failed. Later, along with a group of echidna warriors, he tried to take the Chaos Emeralds as he considered it a key to the echidna tribes' survival. Tikal tried to defend the shrine and the Chao but Pachacamac ignored her pleas and ordered the warriors to go on. Tikal is pushed aside and the Chao of the shrine are killed in the process. This angers Chaos who appears and uses the Chaos Emeralds to become Perfect Chaos. Pachacamac and his warriors are killed and the Knuckles Clan's home in Mystic Ruins is destroyed. The carnage only ends when Tikal rushes to the Master Emerald to plead that it gets Chaos under control.

In Incan mythology, Pachacamac ("Earth-maker") was a chthonic creator-god, originally worshipped by the Yuncas but then adopted by the Incan Empire. He was a son of Inti and Mama Quilla, and husband of Mama Pacha.

He created man and woman, but forgot to give them food and the man died. The woman cursed Pachacamac, accusing him of neglect, and he made her fertile. The god killed her son and cut the corpse into pieces, each of which became a separate fruit or vegetable plant. The woman's second son (Wichama) escaped, so Pachacamac killed the woman. Wichama sought revenge and drove Pachacamac into the ocean.