Jester's Challenge is a hack of Sonic the Hedgehog for the Sega Mega Drive by MarkeyJester featuring a simple maze-like level hack which extended into one of several proof of concepts. 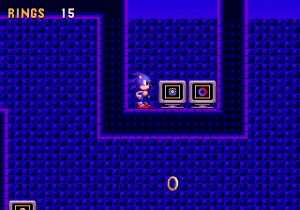 The new monitors in this hack.

As soon as the ROM is loaded Sonic is dropped into a level called the Param Zone. Jester can be seen in many locations in the maze and when you press

while standing next to him an arrow will appear above his head directing you to where you should go. At particular points he may have short messages to say like "You're on track!".

Most of the normal monitors from the original Sonic 1 are present as well as two new monitors. Monitors with red and blue arrows inside will change the stage layout when hit, and hitting monitors with a snowflake in them will freeze the entire stage or thaw it out if it is already frozen. Wind turbines can be seen in the background at the top of the maze and as Sonic proceeds further downward in the stage things get hotter as the pallette changes and heat shimmers indicate an inferno in the background. When everything is frozen the heat shimmers aren't there, the turbines stop moving and Sonic's breath can be seen. Motobugs appear in many random places in the maze.

Once the player reaches the end of the maze, there will be something big and suprising waiting for him/her, however, the only way for YOU to find out what "it" is, is to play right through it, good luck!

The music is notable for being a series of DAC samples played together. Instead of having an entire PCM track in the ROM taking up a lot of space, they have been split into small samples that can be repeated and reused to make the tracks feel longer while keeping the ROM size down. The songs and authors are listed below and are also listed in the credits screen: