Difference between revisions of "Insta-Shield" 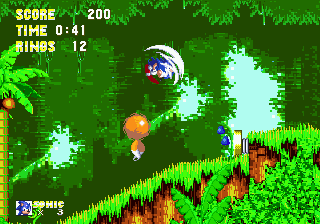 Jumping then pressing the jump button again while in midair generates a brief flash that extends Sonic's attack radius and renders him temporarily invincible. This attack is useful for attacking bosses slightly out of range and spiked enemies, like Orbinauts. No character but Sonic is able to use this technique. In the classic Sonic games, if Sonic jumps from a roll, he'll be unable to change his jump direction and speed. Using the move, however, makes him regain control of the jump. This also happens with Super Sonic, despite the fact that the move itself doesn't actually trigger while Super.

button rather than the

It is not used in any 3D games, due to the fact the "jump, then press jump again while in midair" move was changed to the Jump Dash, or if enemies/items are nearby, the Homing Attack. Sonic Generations brings the move back as an equippable Skill for Classic Sonic that is unlocked by collecting all of the Red Star Rings in Sky Sanctuary Act 1, costing 30 Skill Points to equip.

The move was retroactively added to the 2013 iOS/Android remasters of Sonic the Hedgehog and Sonic the Hedgehog 2 as a hidden ability. To enable it, the player must enable the elemental Shields in the level select menu. It is also unlockable in Sonic Mania by getting at least six medallions in the Blue Spheres Bonus Stage. It can be used in Mania Mode by toggling Sonic's ability in the Settings menu (Secrets menu pre-v1.04), replacing the Drop Dash.

In the first part of the two-part Sonic the Comic story "Enter Knuckles" in issue #33, Sonic first uses the move to protect himself from a Pointdexter, to Tails' surprise. When he uses the move again to block Knuckles' attack in the second part of "Power of the Chaos Emeralds" in issue #36, he explains that he creates the Insta-Shield by vibrating the air molecules around him so quickly that it creates a static effect.

In Archie Comics' Sonic 3 special, Sonic only uses the move once, and does not know how he managed to do so. Much later, he remembers and perfects the technique.