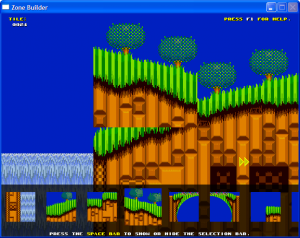 FLOW is a level editing environment designed by Sonic Retro user saxman to make editing easier and feel like a more natural and fluid (hence its name) process.

Originally, it was designed for the Sonic Retro -hosted Community Project Sonic the Hedgehog 2 HD under the name "Gambit" (because it was written primarily to serve the named S2HD staff member's needs.) As the program progressed, the name was changed to "EditHD". When saxman decided to rework the source code to allow it to be easily expanded and adjusted to work with other games, the name "FLOW" was chosen to reflect the project's goal of making every aspect of editing as fluid as possible. Currently the FLOW source code is being expanded to work with the Sonic the Hedgehog 2 disassembly.