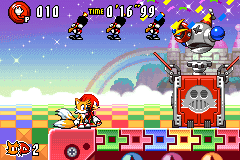 The fourth boss in Sonic Advance 3, Eggman uses what is essentially a jack-in-the-box with a cockpit at the front. Inside the box, Gemerl emerges after every hit as either a clown, a wrecking ball, or a missle. The more hits Eggman takes, the more often he releases a group of three toy soldiers to hinder the player. The boss is not defeated with any amount of hits, but by forcing the boss off the right side of the arena with every hit. It moves gradually to the left whenever it isn't taking damage; upon reaching the far left side, the box sweeps back and forth at high speed (potentially shoving you off the edge) before settling back in the middle. Technically, the boss could last forever if you turn the time limit off in the options.

1) The device launches a missile which flies off the top of the screen, and homes in at the player at high speeds. Thus, the player must keep moving to avoid the missile. A red arrow sweeping the ground indicates where the missile is predicted to land.

2) The device launches a spiked ball-and-chain, which bounces off the ground and is difficult to properly jump over. After it comes to a rest, the ball-and-chain is retracted back into the boss.

3) The device launches three toy-soldier badniks onto the arena, which bounce once and then fall off the bottom of the screen. Unlike the similar badniks in Acts 1-3, these will not fire off projectiles, but will complicate your efforts by crowding the arena. These badniks can be destroyed normally, but will not leave behind rings.

4) the device springs a giant clown head (complete with Gemerl as a nose) from its top compartment. This action is harmless, though may throw you off balance in the later portions of this boss fight.

You cannot attack the boss when an attack is performed. Additionally, as the boss is forced further to the right, Eggman will increase the rate of his attacks. You can only hit him when the cockpit appears, which is right after any of the previously mentioned attacks. Defeat the boss and be whisked away to Twinkle Snow.