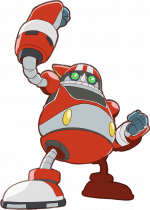 E-10000R is an Extreme Gear racing bot deployed by Doctor Eggman during Sonic Riders. It competes against Team Sonic and the Babylon Rogues in various races of the EX World Grand Prix and beyond. The robot is a playable character in free race or multiplayer modes, unlocked by clocking up over 50 hours of play-time.

E-10000R is ostensibly a Speed type racer, and usually appears in the company of several E-10000G models - almost identical robots but for their colour. According to Sonic Channel, the robot uses a modified version of Metal Sonic's engine for power supply. Like E-10000G, the red E-10000R has headgear that looks remarkably like a backwards baseball cap. Unlike his mass-produced green brethren, however, E-10000R appears to be a unique machine, and is shown commanding the E-10000G horde when they attack Knuckles and Storm on Babylon Garden just before Sky Road.

Its air-boost move shows E-10000R detaching its head and lifting it up to see further - presumably taking advantage of the injury it acquired in Egg Factory, when caught up in a brawl between Storm and Knuckles. More humanoid than earlier E-series robots like the E-100s, E-10000R never demonstrates having the kind of self-awareness exhibited by E-101 Beta or E-102 Gamma, although it is capable of speech.