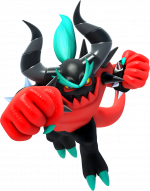 A picture of them briefly appears in Sonic Frontiers during a flashback sequence with Tails in Chaos Island.