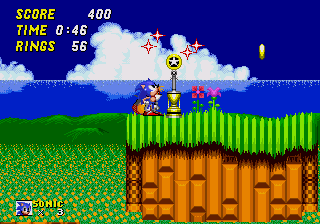 The lamppost design from Sonic 1 is also used in Sonic CD, albeit with a smoother animation cycle upon interaction.

In the 8-bit version of Sonic 1, monitors are used instead of lampposts. Destroying the monitor has the same effect as touching a lamp post. Sonic Blast used the same system, the only difference being that the pictured arrow is red as opposed to yellow.

These two games' checkpoints look quite similar to Sonic 1's lampposts, except that the bulb is replaced by a star disc and the pole design is slightly different. When Sonic runs past the star post, the disc starts flashing and (if the player has enough rings) a torus of stars appears which enable access to a special stage or bonus stage.

Future 3D games games use a redesigned versions of the 16-bit version Sonic 1 lamppost; in these games, two double-lampposts, called a Point Marker, are bent at 90-degree angles, with their blue tops facing each other. Running through the Point Marker causes these tops to spin quickly, turn yellow, and bend to a standing straight-up position.