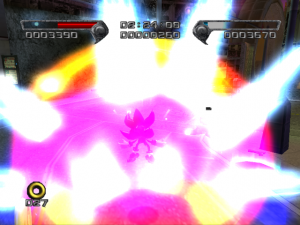 Shadow using Chaos Blast, as seen in Shadow the Hedgehog

Chaos Blast (カオスブラストMedia:Shadow The Hedgehog GC JP Manual.pdf[1]) is an attack used by Shadow the Hedgehog. The move allows him to severely damage everything within a certain radius of himself.

In order to use Chaos Blast, the player must first trigger Dark Shadow mode by performing enough dark deeds to fill the Dark Gauge. In Dark Shadow mode, Shadow glows a bright red color and has enhanced abilities.

Once in Dark Shadow mode, the player must press the upper controller button. Shadow will summon energy to himself and release, causing a massive explosion that will damage all targets in a somewhat wide radius of himself. With the exception of humans, smaller targets are completely destroyed, and larger targets lose a significant amount of health. Chaos Blasts can be used in succession to gain altitude, though normal gameplay only allows for three unless there are quite a few enemies around that where killed by the blast to increase the Dark Gauge more. Shadow may also use Chaos Blast as Super Shadow.

Chaos Blast becomes available after obtaining "Memory Shard (black)". In order to use the move, the player must first activate Shadow's Chaos Boost mode by filling the Action Gauge and pressing

Chaos Blast has a significantly smaller radius than in its debut game. In fact, the radius is decreased so much that the move is virtually useless.

In Sonic Battle, a similar move, called "Chaos Burst", is available. It is exactly like Chaos Blast, except it is weaker and has a smaller blast radius.

In Sonic and the Black Knight during the Deep Woods mission Lancelot Returns, Lancelot can use a move similar to Chaos Blast called "Knight of Chaos". When the sword Ddraig Goch is acquired this move becomes useable, changing his Soul Surge from a move like Chaos Control to Knight of Chaos.

Shadow has also been shown to use Chaos Blast in the Archie's Sonic the Hedgehog comic series. There, Shadow activates his Chaos Boost mode by removing his inhibitor rings.