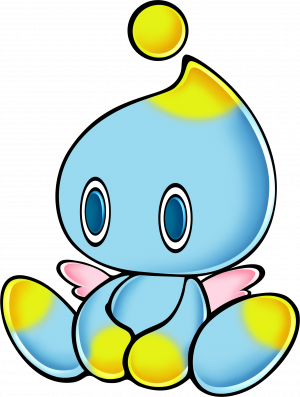 Chao (pronounced /ˈtʃaʊ/, plural form also Chao) are relatively small, sentient creatures found in numerous Sonic the Hedgehog media, especially the video games. They serve as a way to introduce both artificial life (in the programming, not in the franchise's universe) as well as more plot to the franchise. They are based on earlier forms of the technology behind them, known as A-life, which appear in NiGHTS into Dreams with the Nightopians. Chao appear in the following Sonic games: 2 Chao have created an egg after mating.

Chao begin life in an egg, similar to many animals in the real world (particularly non-mammals). When they hatch, they can be trained in many different ways, having multiple different attributes and emotional states. The chao from Sonic Adventure 2 can also favour "dark" and "hero" sides which can lead to variations in visual evolution. Depending on the game, they take various times to evolve. When evolving they go back into their cocoon state (similar to their normal egg state) for a small amount of time. In Sonic Adventure 2, it will take about 8-20 hours spent in a Chao Garden before they either die or reincarnate (depending on how you treat them). They can only reincarnate two times, even if treated well before dying. When they die for the final time, they go into a white cocoon. Chao can also be trained to "ultimate forms" such as the Chaos Chao, the Devil Chao and the Angel Chao. The three variations are all immortal, but do not have the ability to mate and make more chao.'

Chao can be trained with Chaos Drives from GUN robot enemies in Action Stages or animals either found out in the open or in various badniks made by Dr. Eggman. Red represents power, Green represents speed, Yellow represents swimming and Purple represents flying. (Getting the drives could also be done by trading them for rings in Sonic Adventure 2: Battle.) Animals can also affect their appearance; for instance, rabbits can give chao rabbit ears. Various fruits can be bought either in-game (like in Sonic Adventure 2: Battle), in Chao Adventure, or in the Tiny Chao Garden that serve a similar purpose. Plus, in the first Sonic Adventure, feeding the nuts found on the trees gives chao different stats, but it depends on who you play as (for instance, Sonic raises their speed, Tails raises their flight, Big raises their swim... the only one who has no effect is Gamma).

Chao are based on a special technology called A-Life, which originally came from NiGHTS into Dreams on the Sega Saturn where it was used for the Nightopians. They looked like small elves (peach coloured) with bald heads and little blue clothes. However, despite their lower IQ to chao, the Nightopians did have emotions which were reflected in the music they sang and the music in the stages. They could die and become cross-bred with stage enemies (creating things called Mepians), and were born from small white eggs similar to those of the birds.

Possibly the most famous Chao is Cheese the Chao, the (invincible) partner of Cream the Rabbit (the walking, talking and flying rabbit) which can be seen in action in Sonic games (Namely Sonic Advance 2 and Sonic Heroes) as well as being a character in Sonic X, a Sonic anime that is now airing in America and a cameo in GameCube's Sonic Adventure DX, a remake of Sonic Adventure for the Dreamcast.

As with the Chao of earlier Sonic manga and magazines, Cheese retorts "Chao Chao Chao" instead of talking. This is said to be taking advantage of the Pokémon craze, but this is not true as many fictional Japanese animals said their name rather then talking long before Pokémon. However, this speech aspect is not true to all Chao, as Chao from the games often purred or make simple noises rather then simply saying their name.

Chao come in many forms, and the way they are raised has a large impact on their physical appearance and emotional growth. There are however a few 'basic' forms of chao that can be achieved through selective breeding. These too are divided into two groups: alignment and attributes.

Chao begin life in a neutral alignment. During their first stage of life, their later development is determined on how they are treated. They can, after they evolve, become either a Hero Chao or a Dark Chao. In Sonic Adventure DX, alignment is altered based on special foods given to the chao. In Sonic Adventure 2, being good to the chao, such as picking them up, rocking them, and petting them, will make the chao favor the alignment of the character that is doing the action. Sonic, Tails, and Knuckles are the Hero characters in the game, while Shadow, Rouge, and Dr. Eggman are the Dark characters. Harming the chao, via throwing them, stepping on them, or actively attacking them, makes them favor the opposite alignment of the character.

In Sonic Chronicles: The Dark Brotherhood, Chao eggs can be found scattered throughout the game, from Green Hill Zone to the Nocturne fortress. Chao hatch from these eggs over time, and are deposited in the "Chao Garden" (which is not an actual accessible location as in the Sonic Adventure games, but can be viewed from the game menu).

The various Chao which hatch have profound usefulness in the game's combat system. Equipping a fighting character with a chao confers a variety of different combat advantages.

There are 40 different chao in all (not including "viral" Chao), although multiple copies of each can be collected.

NOTE: Cheese is even more unique than the other "unique" chao in The Dark Brotherhood; s/he can't be hatched from a Chao egg, and must instead be picked up in Green Hill Zone as part of the mission to recruit Cream.