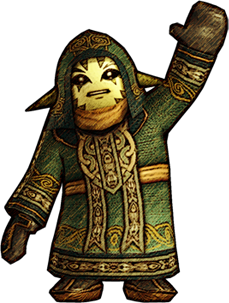 The Arthurian Folk are the standard population of King Arthur's Grand Kingdom and the surrounding lands in Sonic and the Black Knight.

Like some sort of crazy mash-up between humans, elves, and dwarves, the Arthurian folk are populous traders with long, pointed ears and a very short stature, scarcely topping Sonic's own 3'3'' in height. With pale yellowish skin and an apparent predeliction for facial tattoos, these munchkin-like citizens live everywhere from the deep forests to the volcanic outlands and rolling steppes. Saving them from the depredations of their ignoble king and his nightmare legions is the objective of many of the quests in Sonic and the Black Knight, particularly during the Camelot Castle, Titanic Plain, and Crystal Cave levels.

Regular humans are nowhere to be seen in Sonic and the Black Knight; King Arthur turns out to be an illusion, and Merlina the Wizard, though much taller than Sonic (as seen in the cutscenes), has the distinguishing long ears.