Windy Hill is the first and default level of Sonic Runners based on the level of the same name from Sonic Lost World. While all characters can play on this stage, it was best suited for Speed Types.

Like the level it's based on, this level follows the same level style of Green Hill Zone, just like many of the early levels of the Sonic series, with grassy floors, checkered walls, simple plants and trees and small lakes. During the Easter event, the level took on a different appearance such as the grass being changed to a light pink to suit the theme of the event.

During the Easter event the stage changes, in addition to collecting Easter eggs, players are able to unlock various prizes. In it were introduced 3 new companions: Merlina, Easter Bunny and Easter Chao.

In 24 years of Sonic the anniversary event also had a change in the scenario regarding the party. Offering the event, the classic Sonic as a playable character and 3 unique companions, the Death Egg, Genesis cartridge and Sega Mega Drive. At this stage the collectables are replaced by cakes that the player can accumulate to earn rewards. 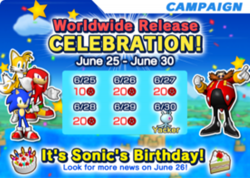