This Area introduces the White Wisp, allowing Sonic to perform the Boost.

Sonic and Tails ascend Eggman's Ultra-Accelerating Space Elevator (as later seen in Terminal Velocity) to explore Dr. Eggman's Amazing Interstellar Amusement Park before it opens to the public. Sonic is convinced that Dr. Eggman must once again be up to his evil tricks, no matter how much the intercom assures that "this park is constructed entirely out of a sense of remorse for my previous transgressions, and is in no way associated in any sort of evil plot or premeditated misdeeds". While there, they run into Cream the Rabbit and her Chao companion Cheese, who has been mistaken by Orbot and Cubot for a Wisp. 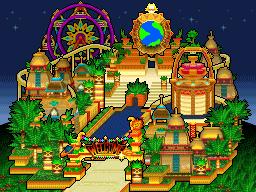 The map screen for Tropical Resort.

As the centerpiece of the Interstellar Amusement Park located on the underside of the Egg Mecha, this Eggman hotel resort resembles a glitzy, orbital Vegas. Fireworks, neon signs, and huge golden buildings crowd the backgrounds. Although it shares the setting with the Wii stage, this DS counterpart stage features its own unique gimmicks. Giant totem heads serve as transport between different elevations.

The Tutorial Stage in the DS version of the game takes place at Tropical Resort. Tails walks the player through basic functions such as running, jumping, sliding, stomping, the Spin Dash, and the Wall Jump.

Tropical Resort Act 1 on the DS is where Sonic and Tails first run into Yacker and the White Wisps, chasing away Orbot and Cubot, who are looking to capture them. The Act itself is fairly straightforward and encourages the player to use the basic moves from the tutorial. Near the end of the Act, there is a 3D hang gliding sequence in which the player can move around to avoid obstacles and collect Rings while gliding. There are more areas to explore here after unlocking the White and Red Wisps.

After a short tutorial, Act 2 is more or less the same as Act 1, this time focusing more on the Sonic Boost. At the beginning of the Act, the player will boost through the supports of a giant ferris wheel, causing it to roll downhill and chase after Sonic. To escape it, the player must use the Boost. After unlocking the Red Burst, the player can return to this Act to discover new routes.

To clear Mission 1, Sonic must collect 30 White Wisps within one minute by defeating Badniks or destroying Wisp capsules. After the mission, Cream explains that she mistook the space elevator for a ride and traveled up to the park with Cheese.

Orbot and Cubot have captured a Chao and will not release it unless Sonic completes this mission, which takes place in Tropical Resort Act 2. It is a Time Trial in which Checkpoints will increase Sonic's remaining time. To clear this mission, the player must reach the goal before time runs out.

To clear this mission, Sonic must collect 250 Rings within a minute and a half.