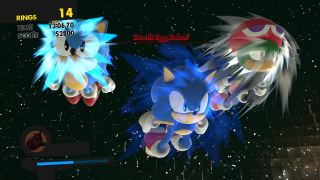 Classic Sonic, Modern Sonic and the Avatar performing the move.

The Triple Boost (トリプルブースト Toripurubūsuto) is a move performed by Modern Sonic, Classic Sonic and the Avatar together in Sonic Forces. This move is like the Double Boost, except Classic Sonic participates in the move.

When the trio is ready to perform the move, they will jump up side-by-side while boosting forward simultaneously, then the player is prompted to repeatedly press the

(Switch) or boost(originally shift)(PC) button within a few seconds to power up the boost. If performed correctly, the trio will shoot themselves forward as a combined projectile with enough force to penetrate extremely tough robot armor.

This move is only used during the final phase of the battle with the Death Egg Robot when it has lost nearly all of its health, and must be peformed correctly to complete the boss battle, much like the Final Color Blaster from Sonic Colours. If the player fails to power up the boost, the attack will fail, and they will need to boost through the boss and perform it again. It can be annoying on PC as in some point of performing it, it won't have any detection.