Its development was announced 28 May 2009,[47] with the game being released in early 2010. It has so far been released for five home systems, including the Xbox 360, PlayStation 3, Wii, Nintendo DS, and PC. An arcade version of the game, titled Sonic & Sega All-Stars Racing Arcade and which runs on Sega's RingWide arcade hardware, was released in 2011. An iOS version was shown at E3 2011; this version is the only version of the game released in Japan. 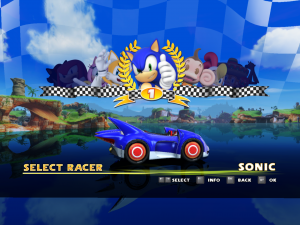 Some of the items in this list can come in a set of three, and can all be used at the same time by holding the "Item" button for one second.

There was also a version for J2ME phones developed by Gameloft.