Sonic Time Twisted is an open source Classic Sonic style fan-made game for Windows PC, Ubuntu Linux, macOS, Android and NVidia Shield. Headed by Overbound, the game tries to improve upon the best features from Sonic the Hedgehog CD and the other Genesis/Mega Drive games. These features including time travel, elemental shields and 3D special stages. The game has been in development since 2005 in various forms and was fully released in 2017. The latest version 1.1.2 was released in March 2022.

In Sonic Time Twisted, the player controls just as Sonic and co. play in the Genesis titles. Like in Sonic the Hedgehog CD, the player must use time poles (now adjusted to be instant) to travel through two different time zones, Past and Future. In the Past, Sonic must find the Special Stages and collect the Time Stones, while in the Future, Sonic must also find the Special Stages, however, these have the Chaos Emeralds. Beat all 14 Special Stages in each time zone (7 each) and the player will achieve the True Ending. Besides that, the player must traverse through 8 zones, most with 2 acts each, reach the Goal Post at the end, as well as encounter a boss at the end of the stage be it Metal Sonic or one of many loyal Super Badniks.

Taking place in an alternate timeline, Sonic Time Twisted follows after the destruction of the Death Egg and the death of Dr. Robotnik. Metal Sonic returns from the Little Planet with a plan to resurrect his creator using an ancient alien technology, and takes charge of the Badniks to keep Sonic and co. at bay. Can Sonic, Tails and Knuckles collect the Chaos Emeralds and Time Stones to stop Metal Sonic before its too late?

Play as Sonic with all the moves from the Genesis/Megadrive games. Spindash, Super Peelout and Insta Shield are present in addition to shield powerup moves.

Play as Tails with his ability to fly and attack enemies with his spinning tails.

Play as Knuckles with the ability to glide and climb walls. Additionally Knuckles can now take out enemies at high speeds with his whirling arms.

Perform a bounce attack as Sonic and survive underwater without air.

Double jump with Sonic, draw rings towards the player and avoid harm from electric attacks.

Dash Left and Right with Sonic and avoid fire attacks.

Bounce rocks at your enemies as Sonic and avoid damage from spikes.

Launch an ice attack as Sonic to freeze enemies in place for a limited time. 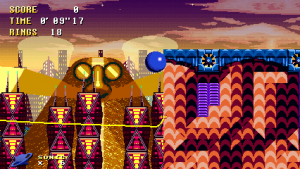 It's not a tropical level! This amusement park is partially under the control of Dr. Robotnik's robots in the future, but still under construction in the past. Test your acrobatic skills on the tightrope, or keep your head up in the ball pits. 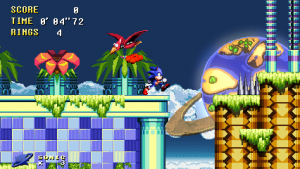 In the past, speed through a garden of mystical ruins floating in the clouds. In the future, a high-sky city has taken over the skyline. Blast through cannons at your own choice of direction through the city, or navigate windy currents and avoid mechanical dinosaurs in the past. 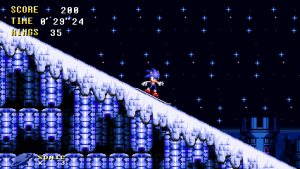 This gorgeous winter wonderland with a calming atmosphere hosts a huge castle complex in the past that gets ruined into a toxic frozen wasteland in the future. Warp around the future on magnetic orbs from Sonic & Knuckles's bonus levels, or explore the castle in the past through spiraling portals. 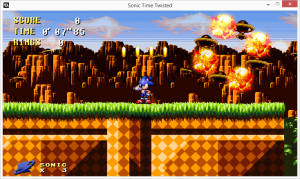 A lush green zone, with the marina in the future and prehistoric jungle in the past. In many ways, a breather level in terms of atmosphere, but danger and challenges creep in the shadows. 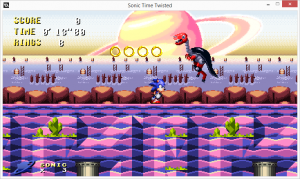 Far out in the badlands, pursue and explore the suspicious "Drifting Dynamo Airship" and explore the twisted desert down below in the future, or venture through the much more lush past and Sky Chase your way around on the Tornado to find the origins of the Dynamo. 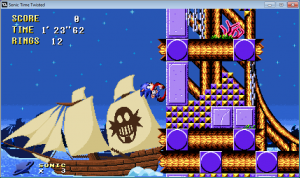 Adopted from Sonic Zero: Remastered and re-imagined into a new experience, players can zip through the pipelines of one of Robotniks oil rigs in the future, or explore the pirate grottos in the past.

Deep under Tidal Tubes lurks the ruins of an underwater mother ship. Here, Metal Sonic hopes hold the key to resurrecting Dr. Robotnik. Trek through a stage that's a "reverse Sky Sanctuary" down to the bottom, running right and left to navigate the maze!

The final normal play zone. Will Metal Sonic succeed in his plans to bring back Robotnik from the dead? 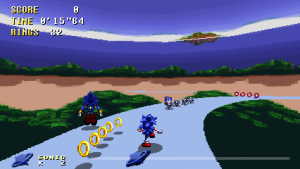 While exploring the past look out for Big Rings that will warp you to one of seven 3D Special Stages where you can win a Time Stone by beating Metal Sonic in a race to the finish. Along the way you can collect lives and shields. 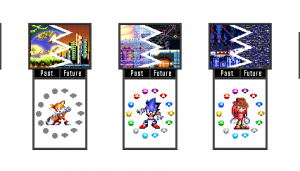 The game has 7 save slots to choose from, with a delete slot at the end. When one fills a slot, they can go to any previous act and time period that they have visited, however note that Special Stage Rings won't reset until finishing the game.

Note that although this file select shares many aspects with the Sonic The Hedgehog 3 file select, its level select can be used without finishing the game. The game used to not include a "No-Save Mode" until one was added in 1.1.0, originally for technical reasons.

When used on mobile, the save screen can be used by scrolling horizontally to select a save slot and swiping up and down to select a character or a zone. Instructions on how to select, create, and delete save slots appear above and below the main interface.

The soundtrack for the game, named Dueling Ages was produced by Amelia Hinchliffe with tracks from LARKSS, Andy Tunstall, ExShade, and others.

Downloads for the Soundtrack can be found here.

With release 1.1.0, Android and NVidia shield support was added, with Linux and Mac support added later with the respective releases 1.1.1 and 1.1.2. The 1.1 update was largely developed by Alex Khayrullin, Nik a Cat and VectorSatyr.

The source code for Sonic Time Twisted is available on GitHub and is licensed under General Public Licence v3.