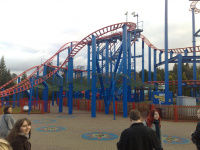 Shot of "Sonic Spinball" ride from the side

Sonic Spinball (previously known as Spinball Whizzer), is a steel spinning roller coaster made by Maurer Söhne of Germany and sponsored by Sega. The ride is located in the Adventure Land area of Alton Towers in Staffordshire, England. Spinball is based on the game Sonic Spinball, released for Sega's Mega Drive and Game Gear systems, and is referenced in the ride's theming.

The ride originally opened in 2004, known as "Spinball Whizzer," a pun on the song Pinball Wizard by The Who. It was decided in late 2009 that the ride would receive sponsorship. The roller coaster was therefore given a red and blue track repaint; new decoys, signage and audio were made, with the station announcements done by Sonic's then-new voice actor, Roger Craig Smith. The ride re-opened to the public on 13 February 2010 during the park's February half term event. A Sonic-themed room was also made available at the Alton Towers Hotel, which features various playable Sonic games and wallpaper based on Sonic the Hedgehog 4 Episode I game. Sega's sponsorship is set to end in 2013 as part of the three-year deal.

Sega previously had a deal with Alton Towers for use of Sonic the Hedgehog in the Toyland Tours dark ride in 1994. A Sonic the Hedgehog animatronic was featured in one of the ride's scenes along with associated sound effects and music. However, the ride was closed for refurbishment at the end of 2004 to make way for Charlie and the Chocolate Factory: The Ride.