"Sonic Returns" is the first episode of the Sonic Mania Adventures web series, first airing on the official Sonic the Hedgehog YouTube channel on March 30, 2018.

Welcome back to Angel Island with Sonic Mania Adventures!

Sonic has just arrived back after the events of Sonic Mania and Sonic Forces, but something is already amiss. What are the huge holes being dug in the ground? And why is Eggman already capturing more animals? The story begins here, with the first of five parts in: "Sonic Returns"![1] 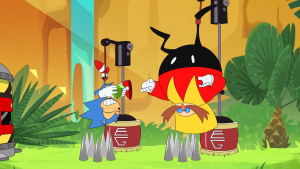 Sonic and Eggman trapped together.

The series begins with Sonic the Hedgehog reappearing in the jungle of Angel Island after the conclusion of Sonic Forces, only to discover there are holes in the ground. While inspecting one of the holes, Dr. Eggman flies overhead with a capsule full of Flickies in tow. With little time to spare, Sonic speeds through the jungle.

Coming to a clearing, he finds the capsule and proceeds to walk casually towards it, only to set off a chain of hidden spike traps. He manages to reach the capsule and set the Flickies free. However, it turns out that the capsule was a trap, and Sonic is pushed off the capsule and is caught with his leg around a noose as the capsule transforms into a time bomb, with Eggman showing up to mock the hedgehog.

Sonic comes up with an idea. He pulls out the green Chaos Emerald, and Eggman, naturally, tries to snatch it away from him, and ends up getting his leg caught in a second noose trap. Trapped together, Sonic and Eggman fight over the Emerald, and Sonic sets himself free by cutting his rope with a spin attack. As the hedgehog tries to leave Eggman to be blown up, the doctor pulls a puppy dog expression, to which a dismayed Sonic reluctantly agrees to help him.

A small device falls from Eggman's pocket which Sonic picks up. It then displays the current status of the other six Chaos Emeralds, with Eggman having four of them, and the red and grey Emeralds still out there somewhere, and Eggman planning on taking Sonic's emerald for himself. After seeing this, Sonic punches the time bomb, taking seven seconds away from the timer, and runs away, leaving Eggman alone with the bomb as it detonates.

After the credits, an old foe awaits in a wrecked forest...