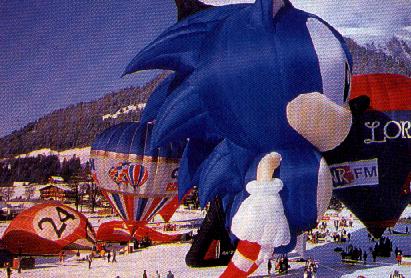 The Sonic Hot Air Balloon was constructed by an English company named Cameron Balloons. Its maiden flight was at a balloon show in Switzerland in early 1993, and the balloon returned to its country of origin to make its British debut late that summer. Since then, it has appeared at many hot air balloon exhibitions throughout the world.

Each member of the team responsible for travelling with and flying the balloon was issued with a limited edition "baseball jacket"-styled promotional Sonic jacket. These jackets were coloured white, yellow, and blue, and featured Sonic himself, a large Sega logo, and embroidered patches on the sleeves representing Tails and Dr. Robotnik (the patches erroneously referred to him as "Professor Robotnik", however). Unfortunately at various shows over the years, when the team left their jackets in the van that they used to transport the balloon and its related equipment everywhere, several of the jackets were stolen until only one remained!

If you were lucky enough to fly in the balloon, or to simply talk to the team about it, the team often gave out promotional stickers which essentially proclaimed that you had taken to the skies with Sonic the Hedgehog. Promotional pins depicting the balloon also exist, and were distributed during its debut year, but they are now very rare.

Although the balloon towers at many many feet high and has a lot of detail on Sonic the Hedgehog himself, it actually folds down to a mere fraction of its inflated size - it's truly amazing just how big it really is, and just how small it folds down to.

At the time it was created, the Sonic the Hedgehog Hot Air Balloon was believed to be one of the biggest, most distinctive, and most detailed character hot air balloons ever made.