The following are instruction manuals for the Game Gear game Sonic Drift 2. 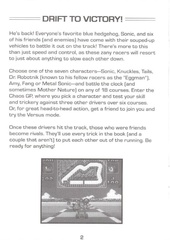 He's back! Everyone's favorite blue hedgehog, Sonic, and six of his friends (and enemies) have come with their souped-up vehicles to battle it out on the track! There's more to this than just speed and control, as these zany racers will resort to just about anything to slow each other down.

Choose one of the seven characters—Sonic, Knuckles, Tails, Dr. Robotnik (known to his fellow racers as the 'Eggman'), Amy, Fang or Metal Sonic—and battle the clock (and sometimes Mother Nature) on any of 18 courses. Enter the Chaos GP, where you pick a character and test your skill and tricker agaisnt three other drivers over six courses. Or, for great head-to-head action, get a friend to join you and try the Versus mode.

Once these drivers hit the track, those who were friends become rivals. They'll use every trick in the book (and a couple that aren't) to put each other out of the running. Be ready for anything!

English translation of the Japanese prologue 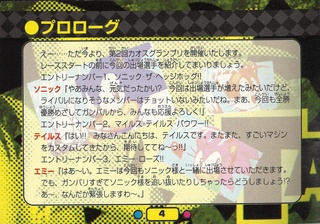 We will now hold the second Chaos Grand Prix.
Before the start of the race, let's take a moment to introduce the competitors.
Entry number one, Sonic the Hedgehog!

Sonic: Hey guys, how have you been? It looks like there are more players this time, but there doesn't seem to be any potential rivals. Well, I'm going to try my best to win it all again this time, so please support me!

Tails: Right! Hello everyone, Tails here. I got to customize another awesome car, so stay tuned!

Amy: Hey there. I will be competing with Mr. Sonic again this time. But what if I try too hard and end up overtaking Mr. Sonic? Oh, I'm so nervous!

Eggman: Daahahahaha! As I've always said, I am the ruler of the world, the super genius scientist, Dr. Eggman! This time, it's me and Metal Sonic who will cause a one-two punch finish!

Eggman: Daahahahaha! He doesn't talk much!

Fang: There's an annoying old man making a lot of noise... But if I win the Grand Prix, I'll get the Chaos Emeralds? Then I'm gonna be the winner!

Knuckle: Sheesh... None of them are fit to take me on. Anyway, if you support me, you won't be disappointed!

All right! These seven super cars are finally ready to go!