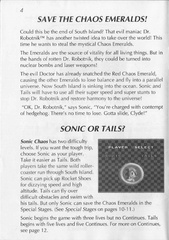 South Island, an island of peace...
This is where the super-substances of dreams, the Chaos Emeralds, lay dormant. These mythical gems hide infinite power, but they can become fearful weapons depending on how they're used... Now, the evil genius scientist Doctor Eggman has once again taken action, and is after those Chaos Emeralds!

One day, while on an adventure, Sonic and Tails heard a nasty rumor.
"Eggman's got one of the Chaos Emeralds?!" They hurried back to South Island and found that the island of peace was already in chaos! When one of the gems was taken, the rest of the Chaos Emeralds scattered, and the island, which had been held together by the power of the gems, was about to sink into the sea!

"I've won this time! I own the world, Sonic!"
"Darn it, Eggman, we're gonna get those Chaos Emeralds back! Come on, buddy!" "Roger!"

Sonic and Tails set out to crush Eggman's ambitions and save the sinking South Island. Will Sonic and Tails have the last laugh, or will it be Eggman?

After all's said and done, Sonic is awesome and cool! That's why the people who play him have to be high class. Sonic is the only one who can collect all the Chaos Emeralds.

My real name is Miles, but everyone calls me Tails. My goal is to be like Sonic! But I still have a lot of training to do...

Eggman is never discouraged by his defeats... In spite of everything, he's back for a third time! His favorite things are the Chaos Emeralds. His least favorite is Sonic. His hobby is, as always, world domination!