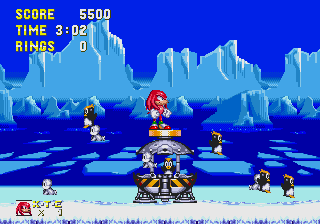 In addition, Flicky, who made her debut in the eponymous 1984 arcade game of the same name was also included as part of the Sonic lore (although as a male[1]). Further animals have been added to the series since, but with only Sonic and Eggman as other characters in the original game, each of the original seven regularly appear in early Sonic promotional material and merchandise. In Western lore these characters were said to have taught Sonic the abilities he uses in his first video game outing[2][1], and many of their designs formed the basis for characters in the 1993 Sonic the Hedgehog cartoon and well as the UK's Sonic the Comic.