Sonic's Fun and Easy Adventure is a hack by Ralakimus. It's based off of an optimized version of the Sonic 3 & Knuckles engine and is made to be played on the Sega Mega Drive.

This hack also uses a technique similar to Sonic 3D Blast's FMV process to create a completely custom Sega Screen. Something not seen in many Sonic ROM hacks. 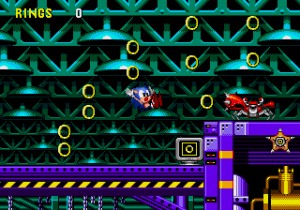 The stage in question..

The game has only 1 act to play through. The level itself resembling Wacky Workbench with hazards and elements from many of the other Sonic games. Contradictory to the title, the game was made to be ridiculously frustrating and tedious to evoke strong negative emotional reaction out of the player. Each part of the stage was made specifically with this in mind, every single thing in this hack selected out of an assortment of ideas on what were the worst aspects of the classic Sonic games.

The player starts out in danger of being hit right away. Being in constant danger being a theme of the entire hack. You'll need to learn through trial and error how to exactly beat the level alive. This shouldn't be too much of an issue given that you start out with an unlimited amount of lives and many checkpoints are scattered through the level.

Once you beat the boss of the game, you'll be in for a sweet treat that only the winners of this game get to fully experience.

This game uses Mega PCM to play loops of actual songs for the title screen and game over screens.

Another track which was sequenced in SMPS was given by BinBowie to be used for the level music; this music being a cover of Uchoten's 1986 new wave song "BYE-BYE".