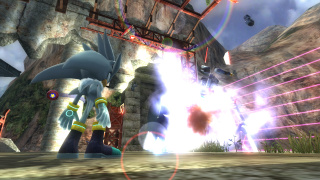 Light CoresMedia:Sonic06 360 US manual.pdf[1] (ライトコア)Media:Sonic06 ps3 jp manual.pdf[2] are stamina replenishments that are released by defeated enemies in Sonic the Hedgehog (2006), and can be collected by Sonic, Shadow, and Silver to charge up their power gauges, enabling Chaos Control or Psychokinesis. Both kinds of enemies release the cores, as they power both Eggman's robots and Iblis monsters.

The technology was developed as a robotic power source by the Rimlight Corporation of Soleanna in Sonic '06. Eggman, however, raids their offices in Soleanna New City to steal the technology and use it in his own robots. In this game, then, the light cores take the place of robotized animals as an energy supply for the fat scientist's Egg Gunners and Egg Sweepers.

Since exactly the same luminescence can be bashed out of defeated Iblis monsters, it may be that the power is actually derived from Solaris, with the cores being a spinoff of the ill-fated Solaris Project.