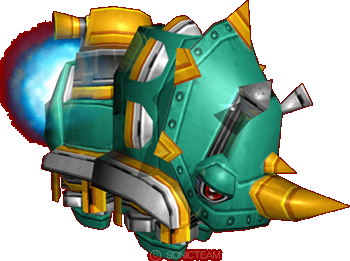 Rhino Liners, are enemies found in Sonic Heroes. They appear to be based off the Rhinotank. Rhino Liners are only found in Rail Canyon, Bullet Station (except Team Rose, unless you go to another Goal Ring located where the other teams go to the canyon), Mystic Mansion (only Team Sonic and Team Dark), and Robot Storm (only Team Sonic and Team Dark).

Rhino Liners are speedy robots that run along a railroad track. The player must always be cautious when grinding on a rail with a Rhino Liner on it as they can be knocked of the rail and fall to their demise. The best way to destroy a Rhino Liner is with Thunder Shoot.

Some Rhino Liners will drop spike balls from behind them which can knock players off rails.