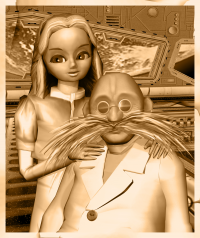 This is a transcript of Professor Gerald Robotnik's journal entries, revealed by re-playing each characters' episodes in Sonic Battle after having already cleared the game. The journals describe his experiments into Emerl on the Space Colony ARK 50 years ago.
Original credit for collating the transcription to TheSinnerChrono. Appended comments by Frozen Nitrogen.

Comment: In Sonic Chronicles: The Dark Brotherhood, it is revealed that the Fourth Great Civilization who created Emerl were the Nocturnus Clan echidnas, enemies of Pachacamac and the Knuckles Tribe vaguely alluded to during Sonic Adventure.

Comment: The "Stone of the Gods" seems to refer to the Chaos Emeralds, singly or collectively, as these gems are indeed "joined" to Emerl over the course of Sonic Battle. The implication Gerald gives here is that Emerl may have physically destroyed the Fourth Great Civilization (Nocturnus Clan) in some sort of crazed ancient rampage of destruction. Sonic Chronicles demonstrates that this was not the case, although Nestor the Wise speculates that Emerl was indirectly the cause of the Nocturnus vanishing from the world, in that it was his power that attracted the attentions of Argus.

Comment: Sonic accidentally follows this procedure again to form a "Link" with Emerl right at the start of Sonic Battle, showing the robot a spin dash when he finds it washed up on the beach outside Emerald Town.

Comment: Gerald refers here to his intention to subvert Project Shadow's stated aim of researching immortality, instead hoping to come up with a cure for Maria Robotnik's Neuro Immunodeficiency Syndrome.

Comment: Eggman repeats the methods of Gerald's contemporaries by using his Final Egg Blaster aboard the Death Egg in an effort to wrest Emerl's "Link" off Sonic near the end of Sonic Battle.

Comment: This is a separate "destruction of most of the ARK" to the one that G.U.N. orchestrates when they finally move in to shut down Project Shadow. Also, the tablet is wrong according to Sonic Chronicles; Perfect Chaos and Argus rained down a lot of destruction around the time of the Fourth Great Civilization, but according to Nestor, Emerl never did any rampaging of his own. Finally, after sealing away the Gizoid these other researchers "misplaced" its location, eventually allowing it to fall into Eggman's posession decades later.

Comment: Maria's last words weren't "Bring hope to humanity"; they were "Sayonara, Shadow the Hedgehog". But still, the sentiment was there. However, Gerald is strangely lucid for a man who, according to Sonic Adventure 2, was going insane at this point.

Comment: This contradicts quite badly Gerald's motivations as laid out in his Prison Island execution video in Sonic Adventure 2, where he states that he wants to "Make all you ungrateful humans who took everything away from me feel my loss and despair!" Which is quite the opposite of "bringing hope to humanity". As for Shadow; Gerald programmed him to be an instrument of omnicidal vengeance, not a creature with a compassionate heart. The best way to reconcile these discrepancies seems to lie (unlike Journal #7) in remembering that Gerald is, by his own admission in Sonic Adventure 2, stark raving mad by this point, and conveniently chalk these final two entries up to schizophrenia.