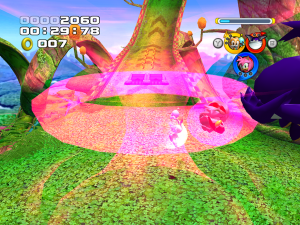 Pink Tornado was Amy's original Tornado Jump technique that was discovered through ASM hacking in Sonic Heroes. The developers of the game decided to replace this ability with Tornado Hammer for the user.

Unlike Shadow's and Sonic's tornado abilities, her tornado does not attract to enemies and the voice clips to it were also unused as the technique wasn't used.