"Mighty and Ray" is the fourth episode of the Sonic Mania Adventures web series, first airing on the official Sonic the Hedgehog YouTube channel on June 22, 2018.

Ray the Flying Squirrel has been looking for his best friend, Mighty the Armadillo, but he can’t find him anywhere! As he continues his search, he hears something nearby. Could this finally be Mighty, or is it something far more dangerous?[1] 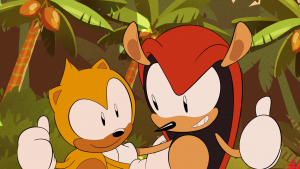 In Angel Island's jungle, Ray the Flying Squirrel continues his search for Mighty the Armadillo to no success. When he arrives in a clearing, he hears something rustling in the bushes. Upon taking a closer look, he sees a blue figure with glowing red eyes. The figure dashes at him, tearing up his Mighty poster in the process. Ray manages to dodge the attack, only to discover that the figure is none other than Metal Sonic, and braces for impact as the robot dashes at him once more.

A sharp sound is heard and Ray looks up to see that Mighty has used his shell to defend his friend. Mighty then uses the boulder that Ray was leaning against to smack Metal Sonic away, then throws a second boulder to incapacitate the robot. Ray and Mighty happily reunite with a fist bump. During so, Metal Sonic detects that Mighty holds the final Chaos Emerald, then he quickly hits Ray away from Mighty and holds him by the throat, demanding the Emerald. Mighty prepares to hit Metal Sonic but sees that Ray is in distress, leaving him no choice but to forfeit the Emerald to Metal. Metal Sonic drops Ray and flies off.

Mighty tries throwing another boulder at Metal Sonic, but misses. Ray suggests to Mighty that he should throw him upwards to see where the robot was heading to. Mighty does so and Ray manages to land on a palm tree, giving him a view of the area. He sees Metal Sonic heading towards a fortress while also seeing a blue hedgehog and a two-tailed fox running in that same direction, as well as a very angry Knuckles chasing them down. Ray directs Mighty in the direction they need to follow and the two set off.