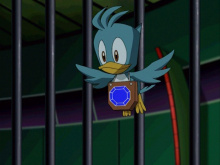 Lily is the name given in Sonic X for the blue bird that Amy Rose befriends in Sonic Adventure, although the creature was referred to only as "Birdie" in the game. During the game's story, she is being chased by Dr. Eggman for the cyan Chaos Emerald hanging around her neck.

Before the beginning of Sonic Adventure, Lily and her family were apparently captured by Dr. Eggman, to be used as organic batteries in his robots. Amy first encounters Lily in Sonic Adventure when the bird slams into her after escaping from Eggman's Egg Carrier. Soon Lily is pursued by ZERO and Amy vows to protect her. After getting separated from Sonic, Amy and Lily get kidnapped by ZERO and are put in a holding cell aboard the Egg Carrier. Eggman orders E-102 Gamma down to the cells to retrieve Lily from Amy, and as the robot approaches, Lily flies up to Gamma's face, appearing to almost recognize it. Unknown to Amy, a member of Lily's family was inside Gamma. Because of this, Gamma reneges against his programming and releases the two.

Lily's gender was changed to male in the English version of Sonic Adventure for unknown reasons. While the Japanese version also makes it clear that Lily and the other two birds are siblings, this is never mentioned in the English version - only referring to the other two birds as "family". In Sonic X, Lily's keeps her role from the game, as well as her original gender.