Lava Reef Zone is the fourth Zone of Sonic & Knuckles (and the tenth Zone of Sonic the Hedgehog 3 & Knuckles), set deep within Angel Island's volcano. Sonic and Tails fall in from Sandopolis Zone, while Knuckles walks in (from the same spot).

This is the last Zone in the game to feature Giant Rings, therefore this is the player's last chance to gather any remaining Chaos/Super Emeralds from the Special Stages.

The longest level in any Mega Drive Sonic game, Lava Reef Zone is an underground labyrinth of rocks, crystals, magma and general chaos. Lava and fire traps are everywhere throughout the Zone, making it very important that the player obtains a Fire Shield to keep themself safe. Across both Acts, the player will have to locate buttons to open doorways and Spin Dash through breakable walls to proceed.

The first Act is a mine-type level held up by wooden beams and purple pipes that pump the island's magma through. Stalactites will fall from the ceiling when the player passes under them, and rocks in the lava will sink when the player steps on them. Black wheeled lifts found throughout the Act are operated by standing on them and performing a Spin Dash, with the lifts moving down if the player faces left, and moving up if the player faces right. The most dangerous obstacles are the giant spike balls that roll about, and wide bronze crushers found throughout the Act that slowly rise, then drop down and crush the player, though it is often necessary to ride on top of them to reach high places. At a certain point for all characters, the player will encounter an upgraded version of the Tunnelbot that will drill a hole in the ground, dropping the player into a pit of lava.

After defeating the Heat Arms, the lava will cool, allowing the player to proceed to Act 2, which is a crystal wonderland with flamethrowers, moving blocks, high-speed transport tubes, and smaller spike balls that swing around posts and platforms in unison or thrown into the air by small launchers on the floor. Long, rotating drums found throughout the Act are lined with spikes as well as handles for the player to grab hold of; by letting go when swinging upwards, the player will be catapulted upwards to high places. During Sonic and Tails' adventure, the Death Egg can be seen in the cavernous background, showing that they are getting closer to stopping it.

After Sonic and Tails climb a long staircase, they will encounter Knuckles, who punches a boulder that sends the heroes to a "third Act" (technically part of Act 2) where the Death Egg activates the lasers on its eyes to re-ignite the whole volcano, leading the heroes through a treacherous auto-scrolling section that leads up to a battle with the Hot Mobile. After defeating the Hot Mobile, the lava cools down again, allowing the player to follow a corridor that leads to Hidden Palace Zone. When playing as Knuckles however, the player does not visit this area, and instead follows a path beyond where the boulder would be to a corridor that goes straight to Hidden Palace Zone without a boss or results tally. 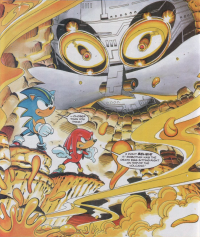 Lava Reef Zone as it appears in Sonic the Comic #49.

In the Sonic the Comic series, Lava Reef Zone is visited by Sonic and Knuckles in issue #49 after having escaped the Sandopolis Zone, where the heroes find the Death Egg resting in the volcano's funnel. They were confronted by a squad of Eggrobos, though Knuckles defeats them all quickly by breaking the terrain, spilling hot magma all over them, allowing both heroes to head for the Emerald Chamber.

Knuckles would later revisit the Zone in the Knuckles Knock-Out Special to rescue an Emerald Hill resident named Jake from an Eggrobo. He defeats the Eggrobo by punching it and knocking into one of the fire geysers, seemingly killing Jake. Fortunately, it was revealed that Jake was never inside the Eggrobo.

In Archie Comics' Sonic the Hedgehog comic series, Lava Reef Zone was originally the home of the Fire Ants until it was used as a hiding place by the Dark Legion. When Sonic, Knuckles and the Chaotix arrived at the Zone to rescue Locke, they clashed with the Dark Legion.