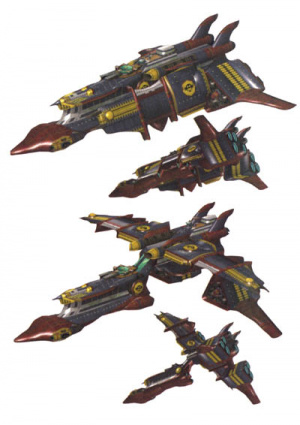 In the Sonic the Hedgehog universe, the Egg Carrier (エッグキャリア) is a formidable flying fortress frequently utilized as a mobile base of operations by Dr. Eggman. It is perhaps the most iconic in a long series of Eggman aerial strongholds, stretching all the way back to Sky Base in Sonic the Hedgehog (8-bit). Multiple individual skyships have held the name "Egg Carrier"; the most prominent of which is the original, where it featured as an Adventure Field in Sonic Adventure.

A massive floating skyship of grey and red steel, emblazoned with Eggman's face-symbol, the Egg Carrier of Sonic Adventure causes panic amongst the human citizens when it appears in the skies above Station Square. It is one of the game's three overworld Adventure Fields, allowing access to the Action Stages of Sky Deck and Hot Shelter. Two Tornado missions, Sky Chase Act 1 and 2, also depict Sonic and Tails' approach to the flying fortress. The Egg Carrier is capable of transforming into two forms; the second form extended the wings, making it impossible to get to the bridge without going through the Sky Deck first.

At the end of Sonic Adventure, the original Egg Carrier ends up splash-landed in the sea a few miles off the coast of Mystic Ruins. Surprisingly, Eggman arrives at the final boss battle against Perfect Chaos with an identical second Egg Carrier, allegedly built for the precise contingency that Chaos might rebel. However, the second carrier is functional on-screen for only seconds before Perfect Chaos swats it out of the sky with an aquatic ionization beam. The ship crashes into the flooded ruins of Station Square and is consumed in an explosion. While the flagship of the Eggman Fleet in Sonic Heroes is never referred to as an Egg Carrier in the game, a near identical ship in Sonic Chronicles: The Dark Brotherhood is named Egg Carrier. In Sonic Heroes, this ship is the setting of the stage Final Fortress.

The battleship is used by Metal Sonic to facilitate his transformation from Neo Metal Sonic to Metal Madness and Metal Overlord. Not only does it house the prison cell from which Team Chaotix free Eggman, but it also contains an armoury filled with Shadow Androids (later destroyed by E-123 Omega). At the end of the game the ship is damaged but still functional.

The new model Egg Carrier in Sonic the Hedgehog (2006) is slightly smaller and sleeker than previous iterations. While there are no game stages set on board, it features prominently in many of the game's cutscenes, frequently seen menacing Soleanna with fiery destruction. Sonic also pursues the speeding craft on foot during the Mach Speed section of Wave Ocean. And while there is no full level, the last boss within Sonic's story, the Egg-Wyvern, is fought on the underside of the Carrier. After the battle, Eggman's skyship explodes in spectacular fashion during a cutscene as Sonic rescues Elise from the disintegrating craft. 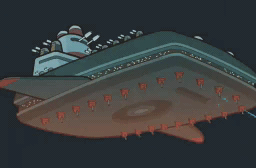 The Egg Carrier, as seen in Sonic Chronicles.

The Egg Carrier plays a minor role in Sonic Chronicles: The Dark Brotherhood, appearing only in the opening cinematic which depicts the GUN attack on Metropolis. Here the ship looks exactly the same as Sonic Heroes' Final Fortress (although Eggman describes it as "my new Egg Carrier", so it may not be the same vehicle despite the identical design). Tails sabotages the Carrier and it crashes into Metropolis, devastating the city in a giant explosion and presumably destroying the skyship.

The Egg Carrier also appeared in Sonic X, one of Eggman's many flying battleships.