Edmund was an echidna from the Sonic the Hedgehog Archie comic series who first appeared in issue 35 of the main series. He was a descendant of the House of Jordann, and was one of the leading minds in Chaos Emerald energy science at the time.

As an intellectual and enlightened scientist, Edmund worked with his brother, Dimitri, to determine a way to return the Floating Island to Mobius. Their ancestors had originally lifted the land out of Mobius to save the city of Echidnapolis from a meteor. Together, they developed the Chaos Syphon; a technological invention that syphons energy from the Chaos Emeralds in the Floating Island. They submitted their idea to the High Council of Echidnapolis, resulting in their plan being turned down. Although Edmund was more accepting of the decision, Dimitri did not take to the idea lightly. 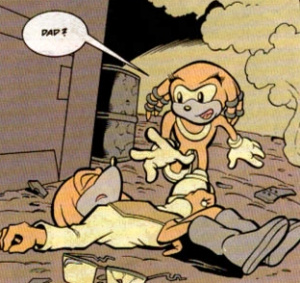 Steppenwolf running to his father, who was just shot down by members of the Dark Legion.

Following his brother, Edmund found Dimitri in the Chaos Emerald chamber, going ahead with the power syphoning without the approval of the High Council. The syphoning led Dimitri to absorb the powers of the Chaos Emeralds, leading him to tie Edmund in his newly created Mount Fate, along with some members of the High Council that joined him. Thanks to the efforts of the fire ants, Edmund and the others were able to escape, but Dimitri was buried in the rubble of the mountain after it collapsed. Meeting up with his son Steppenwolf after the collapse, he took on Dimitri's son, Menniker.

After the events in Mount Fate, Edmund was given the task of guarding the sole remaining Chaos Emerald on the island, becoming the first guardian of the emerald and of the island.

Eventually, the High Council of Echidnapolis held a referendum to rid of all technology. Although it was accepted by a majority of the echidnas, a group were opposed to the decision, forming the Dark Legion. Edmund had helped the government to collect the technologies of the civilization, but eventually became aware of the growing resistance. With help from the fire ant Christopheles, he got the drive to help lead the echidnas back on the right track, especially when he was informed that his son had found out about the Dark Legion.

Edmund, in his journey to help his son, found group of Dark Legion members investigating a vehicle crashlanding (caused by Steppenwolf). He was able to take out a few guards, but was ultimately shot and killed by another. Steppenwolf, who was nearby, arrived to mourn his father's death, and met Steppenwolf, who helped lead him on the path to continue his father's job as guardian of the island and the Chaos Emerald.

Edmund is the son of Byron and Angel-La. They also had another son, Edmund's brother Dimitri, who had a son named Menniker, who would be Edmund's nephew. With an unknown wife or significant other, he had a son named Steppenwolf, who became the second guardian of the island and its Chaos Emerald.