CrazySonic is a joke hack of Sonic the Hedgehog by Ralakimus. This project was first released as a demo build in July of 2015 and was later released in October for SHC 2015. This hack is a mixture of CrazyBus' gameplay and music and Sonic 1's gameplay, plus other additions. It was designed to be as obnoxious as possible to evoke negative reactions from players. Despite this, it is generally considered to be amusing by players, especially first time players. 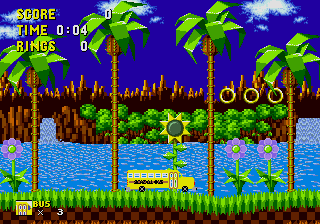 The bus in Green Hill Zone

The main gameplay includes Sonic being replaced with the school bus from CrazyBus. Every level is kept as is in Sonic 1, except for minor level modifications to make them all passable, due to the slowness of the bus. The bus cannot roll into a ball, but can still jump. The bus is also completely invulnerable to hazards, except for being crushed and falling down a bottomless pit. Underwater, it transforms into a yellow submarine, a reference to The Beatles, and even plays a loop of the chorus from its respective song over and over. When pausing, the player can choose to exit the level if they desire. 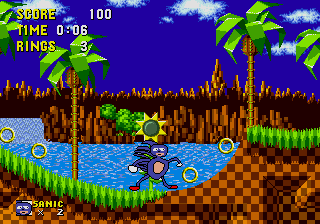 A second playable character exists in the game, Sanic, based off the widely known poorly drawn Sonic. Sanic's control scheme is rather different. For one, Sanic goes faster than the bus. Holding down the B button allows Sanic to move at an extreme speed, which can render him unplayable if used for too long. Pressing A or C makes Sanic explode and lose a life. To jump, the "up" button on the D-Pad must be pressed. A higher jump can be achieved by pressing "down". The control scheme was designed to be stupidly annoying and even contradictory with the jumping mechanic. While playing as Sanic, a loop of Green Hill Zone's music, made extremely loud and higher pitched, which is often associated with the Sanic character.

The game starts with an opening similar to the original CrazyBus. Its SEGA logo screen and title screen were recreated by hand, including the sound effects and "music". Upon pressing start, it goes into a level select, allowing the player to pick whatever level they want, along with a few other options. One of these options goes to a settings menu (originally a cheats menu in the demo version). The other options allow the player to play a "better game" or play a "better song", instead of the original menu "music" from CrazyBus. 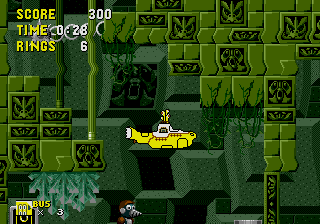 Settings include being able to play as the aforementioned yellow submarine in other levels. Another option allows the player to go super, a la Super Sonic. The only differences in this mode is that the bus' speed goes obnoxiously fast and explosions appear everywhere on the screen. Another option allows the player to play as Sanic, and another sets the game to "420blazeit mode". In that mode, a rainbow palette cycles through the entire screen at an uncomfortable rate, which may cause some issues for epileptics. While the palette cycles, the entire screen is also made all wavy. It also plays a remix of the Yellow Submarine chorus loop while underwater. The final option enables a bug from the demo version of the hack that caused the bus to glitch out if it jumps into a set of spikes laying on their side.

The "better game" option allows the player to play a selection of 3 "better games". The first game is a recreation of the original CrazyBus, based off the original source code. The second game is a faithful recreation of Hong Kong 97, originally released on the Super Famicom, minus the gruesome imagery. The third game is an incomplete recreation of Desert Bus from the unreleased Penn and Teller's Smoke and Mirrors on the Sega CD. This was made into a "Sanic simulator" at the last minute, where the movement on the road was made very fast and it played the loud Green Hill Zone music. This decision was because of time restraints.

The special stages were also completely changed. The bus' special stage is a round of gameplay from CrazyBus. The bus must loop around the screen a certain amount of times, depending on how many of the Chaos Tires (the replacement for Chaos Emeralds) are collected. If none are collected, then the bus must wrap one time. If one is collected, then two times, and so on. Sanic's special stages are completely different. Instead, Sanic is running to the right in a rainbow-filled environment, and Sanic must jump over a pit near the end of the stage to pass. Collecting the 7 (rather than 6 from Sonic 1) Chaos Tires allows the player to go super, like how it can be set in the settings menu. 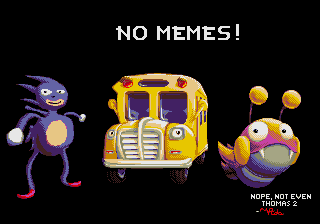 The modified "NO WAY" screen from the fake sequel

For the 1-year anniversary of the demo release of the hack, a fake sequel was released as a prank. It was a hack of Sonic the Hedgehog 2 that was a sequence of unskippable splash screens that lasted about a minute total. Afterwards, the title screen similar to CrazyBus', pops up, with a little more flair. Upon pressing start, it takes the player to a modified No Way screen from Blue Sphere. The cast from the screen is replaced with Sanic, the bus, and a Caterkiller, a reference to the SHC 2015 release of Sonic: Scorched Quest (formerly known as Sonic 1 Burned Edition), where it had a game-breaking bug that caused the game to behave strangely on Kega Fusion (or crash on other emulators/hardware) when the player kills a Caterkiller. The "NO WAY!" text was also replaced with "NO MEMES!". The artwork for this screen was done by VAdaPEGA, whose signature includes "NOPE, NOT EVEN THOMAS 2", referencing the Sonic the Very Useful Engine joke hack.

This fake sequel was then rereleased in The Radikal Ralakimus Hack Pack during SHC 2016 as one of the main hacks in the pack.

Note: Before downloading, if you have any epilepsy, it is recommended that "420blazeit mode" is to be left off.